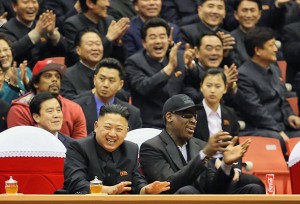 Kim Jong Un and Dennis Rodman watch an exhibition basketball game at an arena in Pyongyang.

The visit of retired basketball defensive superstar Dennis Rodman to the socialist Democratic People’s Republic of Korea from Feb. 26 to March 1 got the White House and the U.S. ruling class steaming mad.

Rodman is reportedly the first person from the United States to meet with Kim Jong Un, who took on leadership of the DPRK in December 2011. Accompanying him on the trip were members of a VICE documentary film crew and Bull Bullard, Buckets Blakes and Moose Weekes of the Harlem Globetrotters.

Rodman told George Stephanopoulos of “The Week” on March 3 that Kim “asked me to give Obama something to say and [to] do one thing. He wants Obama to do one thing, call him.” Rodman said Kim “loves, loves basketball,” and “I said Obama loves basketball. Let’s start there.” Rodman hopes to warm relations between the U.S. and north Korea.

“He has a different view,” said Rodman of Kim, answering the TV host’s assertions that the DPRK wants to obliterate the U.S. “I was there. I sat with him for two days. … He told me to tell Obama, ‘I don’t want to do war.’” Rodman reiterated later in the interview that north Korea does not want war with the United States.

On March 4, White House Press Secretary Jim Carney rejected Kim’s overture and denounced Rodman’s goodwill trip. Carney used the opportunity to arrogantly chastise the DPRK and repeat the ongoing lies that the country’s people “have been starved, imprisoned, and denied their human rights.” He told reporters, “The United States has direct channels of communications with the DPRK and those are the channels we choose to employ.” (thehill.com, March 4)

Since word got out that Rodman was in north Korea, the capitalist-owned mass media began day-and-night denunciations of both the athlete and Kim. The coverage, whether from the right, center or what passes for “left” in the U.S. commercial media, sounded like it was lifted directly from a White House press release. It called Kim a “brutal dictator” of “one of the most repressive regimes in the world” that abounds in “gulags, concentration camps, mass starvation, oppressive control of the population, nuclear war mongering.”

It is to his credit that Rodman called out the U.S. establishment for its hypocrisy, citing the large prison population in the United States.

After having long attacked the DPRK for allegedly being “isolated,” Washington and the media are now attacking Rodman for going there. Go figure.

Rodman was vilified by sportscasters, commentators, news anchors, editorial writers and columnists. In the mildest form, it was about his “naivete” and “outrageousness” and usually included reference to his wearing a white wedding dress to launch his autobiography in 1996. Rodman was described as “flamboyant,” “one of basketball’s most outrageous personalities” and “notoriously unpredictable and irrepressible.”

Media reports reached a crescendo when photos and stories emerged that Kim and Rodman sat together enjoying an exhibition basketball game with Korean and U.S. players on Feb. 28 and also dined and relaxed at Kim’s home.

That Rodman called the North Korean leader “humble,” an “awesome guy” and stated “I love him” has infuriated the ruling elites and their mouthpieces in the media, who love to go after this independent nation that is trying to build socialism free of imperialist dictates and domination. The U.S. ruling class is especially irate because Rodman’s trip came just weeks after the DPRK did an underground nuclear test.

News reports stated that Kim was known to love the Chicago Bulls. Before Rodman was a Bull, however, he was one of the “Bad Boys” of the Detroit Pistons, along with Isiah Thomas, Joe Dumars and Bill Laimbeer, to name just a few, under the leadership of coach Chuck Daly. This was a beloved, blue-collar-identified team, and Rodman and his magnificent rebounding talent fit right in.

Rodman was drafted by the Pistons in 1986 and from early on began to exert his outspokenness and unique personality. When Detroit lost to Boston in game seven of the 1987 National Basketball Association championship series, Rodman called Larry Bird “overrated” because “he’s white” and denounced the racism of the sport, its owners and media.

Rodman’s autobiography, “Bad As I Wanna Be,” chronicled his life growing up poor in Texas, how he liked to dress in clothes of the “other” gender from a young age, and how, like so many other young African Americans, he was courted by the NBA to be used by its system. Rodman had a profound animosity toward the owners and the NBA establishment, and was not afraid to voice his opinions.

Rodman has been vilified because he is unafraid to be outspoken and express himself, to do and say what he believes no matter what the NBA, the sports and mass media might say. He is debased because he is African American, bisexual, transgender and bold. This defamation by the media and the establishment found another heyday in Rodman’s trip to the DPRK: They treat vilification of that country as a sport in itself.

Rodman’s persona, his celebrity as the best rebounder in the history of professional basketball, his status in the Hall of Fame and his place in history and culture as an African-American sports icon make him a unique people’s ambassador. The U.S. capitalists and their representatives in Washington can’t stand the fact that Rodman carried out a successful, well-publicized people’s friendship mission that helped, at least temporarily, to weaken the aggressive aims of U.S. imperialism while opening up a truer look at Kim and the DPRK.