By Dolores Cox and Sara Flounders 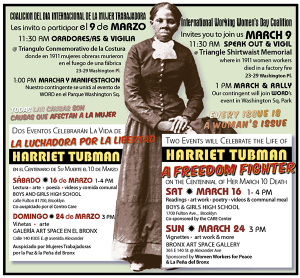 New York — The International Working Women’s Day Coalition, an alliance of community-based women’s organizations that has organized events for the past eight years, has announced plans for women’s events in Manhattan, Harlem, Brooklyn and the Bronx to celebrate women’s struggles — with a major focus on honoring the legacy of anti-slavery freedom fighter Harriet Tubman, who died 100 years ago on March 10. All events are open to the media and are free.

Monica Moorehead, from the Women’s Fightback Network and one of three coordinators of the coalition, told WW: “International Working Women’s Day, March 8, and the entire month of March provide important opportunities to reflect on the inspiring roles that women have played in movements for social justice. Just as importantly, we will show that the challenges for women come in all forms as the capitalist economic crisis intensifies. The motto for our coalition is ‘Every issue is a woman’s issue,’ which means we have the right to housing, education and health care; child care, food, union-paying jobs or a livable income; and not mass incarceration, violence, war and occupation.”

Brenda Stokely of the Million Worker March Movement and a coalition coordinator described the significance of focusing on Harriet Tubman: “Our focus on Harriet Tubman is because she dedicated her life to struggle, to fighting the brutal, vicious system of slavery. She accomplished her own freedom and the freedom of hundreds of others in life threatening situations. And she did it with less tools than we have today. We should dedicate ourselves to claiming power in this country and to fundamentally changing the economic, political and social system that destroys the lives of so many. We need to focus on women’s involvement 365 days a year, especially to get women to understand their role in changing society.”

Irma Bajar, of FiRE — Filipinas for Rights & Empowerment, the vice-chair of International Relations of GABRIELA USA and another coordinator of the IWWD Coalition, explained, “The International Working Women’s Coalition has been a growing coalition for the past eight years that recognizes that the crisis of capitalism and imperialism is the root cause of the critical issues that weigh heavily on women here in New York City and all over the globe, thus creating an inclusive space that encourages women, LGBT folks, community and our allies to unite, resist and fight back to build the women’s movement here in the belly of the beast.”

The schedule is as follows:

Speak Out & Vigil on the theme “Every issue is a woman’s issue” at the Triangle Shirtwaist Memorial, where in 1911 women workers died in a factory fire.

1 p.m. March & Rally — the Coalition contingent will join a rally called by Women Organized to Resist and Defend (WORD) in Washington Square Park

Videos and readings on Harriet Tubman, along with artwork and poetry, followed by a communal meal. Program co-sponsored by the CARE Center, a youth program.

Vignettes on Harriet Tubman, in Spanish and English, along with artwork and more. This program is co-sponsored by Women Workers for Peace and La Peña del Bronx.

For more information on all of these events, go to iacenter.org or Facebook at International Working Women’s Day Coalition.