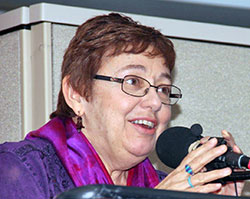 Excerpts from a talk by Sara Flounders, a Workers World Party secretariat member, at the Nov. 17-18, 2012, WWP national conference in New York. See video at youtube.com/wwpvideo.

In response to Israel’s latest bombardment of Gaza, a handful of Palestinian missiles from Gaza struck Tel Aviv and Jerusalem in the last two days. This is a monumental political and military development!

For more than six decades, Israel, with U.S. backing and diplomatic support, has relentlessly bombed, raided and seized the land of the Palestinian people with impunity. They have blockaded and starved Gaza. Israeli drones buzz relentlessly above Gaza. With the Pentagon’s help, Israel is second in the world with the most sophisticated and precise weaponry.

The new Palestinian Fajr-5 rockets might be small or symbolic compared to the arsenal of super weapons held by the Zionist state. But these Palestinian missiles are a game changer.

Imagine what it took to smuggle such rockets over hundreds of miles, through countless hands, to disassemble them and transport them through miles of tunnels into Gaza, then reassemble these precision mechanisms. Imagine keeping them hidden for months in an area as densely populated as Gaza and under Israeli drones that buzz endlessly day and night.

The Israeli military can create enormous destruction. Yet the tide is certainly not going Israel’s way. The Israeli military is being forced to consider what kind of new Palestinian anti-tank weapons might be facing them if they launch a ground offensive.

We support the right of the Palestinian people to defend themselves by firing rockets, digging tunnels, planting mines, organizing popular armed resistance forces.

We salute the Anonymous activists who today launched an international cyberattack defacing and disabling many Israeli websites, including databases of the foreign ministry and Bank of Jerusalem, which they claim was wiped clean.

Israel acts as an extension of Pentagon and CIA power in the Middle East. So it is a big problem that the Zionists cannot defeat Gaza, with the population of Brooklyn.

Israel serves another purpose for Wall Street domination. Today, Israel, with U.S. support, is deliberately risking and threatening a wider war against Iran.

In today’s internal struggle, the masses are kept in the dark when generals, admirals, corporate heads and politicians are pushed out for supposedly “inappropriate conduct.” Of course they are never charged with crimes against humanity.

U.S. imperialism is held together by a monstrous military machine of global terror. In this stage of decline and decay it is important for us as revolutionary Marxists to understand what U.S. imperialism cannot do.

The Pentagon can send U.S. forces around the world. They can set up a city in a box — with housing, hot showers, large kitchens, warm beds, media and internet. But after Hurricane Sandy they were incapable of setting up emergency generators in major New York City hospitals, even though the U.S. military, Red Cross and Federal Emergency Management Agency had all the materials on hand.

They can assassinate a Palestinian leader on a crowded street in Gaza with a drone. But they can’t find a 92-year-old, blind, diabetic grandmother who was evacuated from a flooded, freezing nursing home and dumped in a school auditorium.

They can send police with dogs and helicopters into oppressed city neighborhoods. But they can’t send search and rescue missions into the same neighborhoods.

As we saw in the destruction following Hurricane Sandy, all the fantastic material infrastructure exists and is at hand for emergency assistance for millions. But there is no mechanism for delivery. Because this system is incapable of serving our needs. It exists only to maximize profits for a ruthless handful.

That is why multibillionaire Mayor Michael Bloomberg plans to close Goldwater Hospital, a major long-term-care hospital on Roosevelt Island and spend $100 million of NYC money to help build an Israeli Weapons Facility with Technion to design high-tech drones at the same site.

Are we going to allow that?

Earlier, I said that rockets used in self-defense by Palestinians resisting Israeli bombing was a game changer.

But the real game changer is the consciousness that against this vicious system the only choice is to fight back. Once the oppressed grasp this reality, they will learn to use every weapon, accept every hardship, make every sacrifice. This is our contribution to the struggle for the liberation of this planet from a ruthless predatory system. n