Durham, N.C. — During the rush-hour commute on Feb. 21, organizers gathered at the Exxon gas station on Raleigh Road in Chapel Hill, N.C., to demand that the corporation discontinue their relationship with Grand Isle Shipyard.  Exxon, BP, Shell and Unocal all avail of the service of Grand Isle Shipyard, the oil company responsible for the deaths of three Filipino workers this past November 2012 and the exploitation of hundreds more. 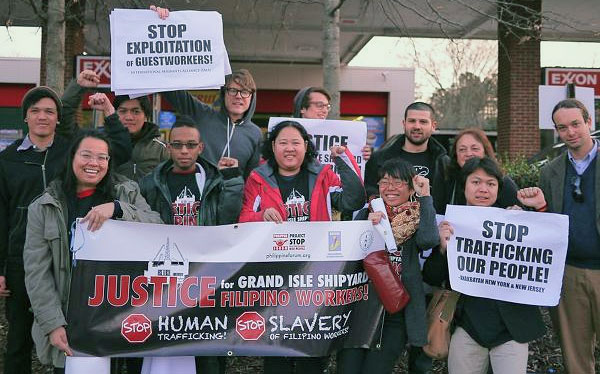 Jonna Baldres of the National Alliance for Filipino Concerns and the Philippine Forum provided a background on the exploitative conditions and the campaign to obtain justice for Grand Isle Shipyard Filipinos.  Yves Nibungco, a national steering committee member of the “Justice for Grand Isle Shipyard Filipino Workers,” urged the communities in North Carolina to take action, particularly calling on Exxon to stop availing the services of Grand Isle Shipyard. He also urged the community to call Congressperson Richard Hudson of North Carolina [202-225-3715], who is a member of the House Subcommittee on Workforce Protections, to investigate the inhumane working conditions and unfair labor practices of the Grand Isle Shipyard and Black Elk Energy. 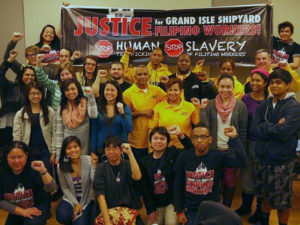 During the Feb. 21 mobilization, Donna Dewitt, co-chairperson of the Southern Workers Assembly, supported the campaign of the GIS Filipino Workers, connecting the struggles of U.S. workers and the migrant Filipino workers. Dewitt related: “Guestworkers face particularly challenging labor conditions, as their visa is tied to continued employment with an individual employer, creating a huge imbalance of power. Similar to other U.S. workers, whether citizens, legal residents or undocumented, these workers have been denied the most basic labor rights due to the greed of a company that put profits over people.”

Justin Flores of the Farm Labor Organizing Committee drew connections between the local struggles of migrant Latino/a workers on local tobacco farms in North Carolina and the Grand Isle Shipyard Filipino workers in Louisiana.  Flores stated: “We know that what happened at Grand Isle is a logical conclusion of a system that leaves workers without rights.  This is what happens when workers can’t complain on the job; this is what happens when workers can’t collectively bargain; and this is what happens when workers’ only way of staying in the country is by maintaining a single employer. We know what it means when U.S. laws don’t mean anything in rural Mexico or the Philippines. We know that the sending countries are fine with it as long as the remittances come back into the country. I’m glad that my brothers and sisters don’t see Grand Isle Shipyard as just one company, but as part of a broken system from Louisiana to North Carolina.”

Later that night, Kasama, a Filipino student organization at the University of North Carolina—Chapel Hill, assembled a forum to discuss the Justice for Grand Isle Shipyard Filipino Workers Campaign.

Caroline Jurado, co-leader and treasurer of Kasama, said: “I think Filipino youth should support the Justice for Grand Isle Shipyard Campaign because we are the people who will pave the way to our future. We’re not only fighting for the Filipino workers at Grand Isle, but for our working rights as well. Our family and relatives traveled abroad once too, whether it was in the United States or elsewhere, in hopes of bettering their lives and ours. By supporting this campaign we are ensuring that their hopes will come true and bring the fair and just treatment that our fellow Filipinos and other overseas workers deserve now and in generations to come.”

Caravans from Chicago; New York City; New Jersey; Washington, D.C.; and the Miami area will be converging in New Orleans to support the struggle of the GIS Filipino workers, as part of a national fact-finding and solidarity mission for these workers. Caravan participants will gather the experiences of the Filipino workers who were trafficked and abused by Grand Isle Shipyard and DNR Offshore Crewing Services, as well as doing outreach to workers who can join the class action lawsuit, initiated by exploited workers, against Grand Isle Shipyard.

For more information about the “Justice for Grand Isle Shipyard Filipino Workers” Campaign, visit j4gisfilipinoworkers.wordpress.com; and for the full statement of the SWA, visit southernworker.org.