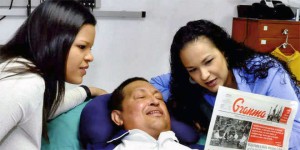 President Chávez’s first public photo since his surgery in December. Taken Feb. 14 in Cuba, the smiling president is seen with his daughters Rosa Virginia and María Gabriela.

In the early morning of Feb. 18, a surprising tweet from chavezcandanga, the twitter account of Venezuelan President Hugo Chávez, announced his return to Venezuela: “We have returned to our Venezuelan homeland. Thank you my God! Thank you beloved people! Here we will continue the treatment.” Two more tweets followed, thanking Fidel and Raúl Castro and the Cuban people for the medical treatment received on the island of Cuba.

As soon as the Venezuelan people heard the news, they spontaneously congregated in the “esquina caliente” (hot corner) of Plaza Bolívar, a space where everyday citizens engage in political discussions. Many also gathered near the military hospital, where Chávez was transferred from La Havana to continue treatment.

The joy of the people was overwhelming. They shouted and sang slogans like “Welcome to our homeland! We love you! We are with you! You are the leader of the Latin American revolution, our second Liberator!” (referring to Simón Bolívar as the first) while carrying photos of the president and Venezuelan flags. Vice President Nicolás Maduro stated that the day will be a national day of joy, and encouraged people to hang flags in their homes.

Messages of well wishes arrived from throughout the region, including those of Piedad Córdoba from Colombia, newly re-elected Ecuadoran President Rafael Correa and many others.

Fidel Castro summed up the relevance of Chávez in a letter written the night before: “When the socialist bloc collapsed and the USSR disintegrated, imperialism, with the sharpened knife of its blockade, intended to drown in blood the Cuban Revolution. Venezuela, a relatively small country of a divided America, was able to prevent it. In the interest of time I will not mention the many countries of the Caribbean, Central and South America that Venezuela, in addition to its great economic and social plans, was able to help. That is why all honest people in the world have followed closely the health and news of Chávez.” (Cubadebate.cu)