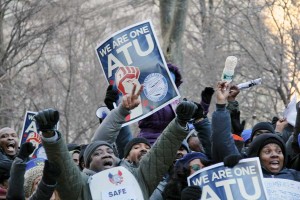 New York — When more than 5,000 school bus drivers, matrons and mechanics marched across the Brooklyn Bridge on Feb. 10, the brutal nature of New York Mayor Michael Bloomberg’s attacks on their jobs became even clearer.

Seeing thousands of faces of the people who care for schoolchildren every day — and whose livelihoods are endangered by Bloomberg’s austerity axe — brings home the stakes in this struggle.

Before that day, public opinion was already moving toward the strikers in Amalgamated Transit Union Local 1181. The media had shut out anything resembling pro-union coverage for the strike’s first three weeks — but this began to change at the start of the fourth week.

On Feb. 8, City Councilor Robert Jackson held a hearing in which City Council members grilled Education Chancellor Dennis Walcott. While Walcott refused to answer questions, the hearing also featured testimony from parents, union members and union officials. Media coverage was sympathetic to the demand that Bloomberg come to the table to negotiate.

The city’s line that it was merely trying to cut costs started to unravel. What emerged instead was a stark plan that threatens schoolchildren’s safety, takes away drivers’ job security and throws families with special-needs children into chaos. 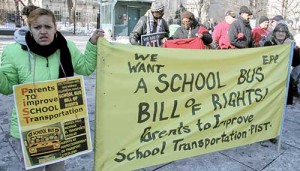 The powerful rally on Feb. 10 dramatized this battle in favor of the union.

Marchers chanted, “What do we want? EPP!” — referring to Bloomberg’s attempt to scrap the union’s job seniority list known as the Employee Protection Provision. Placards read “Bloomberg: Stop bullying our families!” and “Where is the money really going? Open the books!”

In a YouTube video, one worker said, “We’re here for our families, as well as for your families and your child. Your child is our child when they’re in our hands.”

The composition of ATU Local 1181 is 60 percent women — 95 percent of the matrons are women — and 80 percent people of color, with Haitian the most common nationality.

As thousands of Haitian, Latina/o and other workers marched, people could see how a billionaire mayor, one rich enough to buy himself a third term, is blocking the job security of workers whose average salary is $35,000 a year — and endangering the safety of schoolchildren in order to push through an austerity plan.

‘Let’s get rid of capitalism’

From the school bus strike to the so-called fiscal cliff, the banks are mandating austerity for every level of government: the post office, public education, public hospitals, Medicaid, Medicare, school bus service. With the capitalist crisis deepening — and money for war and repression only increasing — banks want to make sure they continue to get their interest payments every month.

It’s one of the great absurdities of capitalism: While the banks are awash in cash, they’re imposing poverty on the people.

A highlight of the rally was when New York City Councilperson Charles Barron — who is Black — called attention to this. Noting that the city has found hundreds of millions for new stadium projects, while it cuts people’s services, Barron told a cheering crowd, “Capitalism is the real problem here. After we win the strike, let’s get rid of capitalism!”

In New York, the city pays banks about $14 billion a year in debt service. The city’s education budget is $1.1 billion. As low as the school bus drivers’ wages are, Bloomberg’s plan to scrap the EPP would mean that, in a best-case scenario, the drivers and matrons would have to apply for their jobs at an even lower rate, without their accumulated seniority and benefits.

The worst-case scenario, of course, is that they would lose their jobs altogether.

Parents don’t want their children to lose the workers they’ve come to know and trust. While during the strike the corporate media has treated parents as helpless victims caught in someone else’s fight, many feel it’s in their interest to support the union — so they marched in the Feb. 10 demonstration. The group Parents to Improve School Transportation (PIST) was out in force, with banners, placards and a speech by co-founder Sara Catalinotto.

Catalinotto said from the stage, “Bloomberg needs to know that the parents blame him for this mess.” She also announced that parents would be holding a protest on Feb. 12 when the city opens the bidding process for new school bus contracts, this time without the EPP. “Parents are going to be there. [The city] told us we can’t go, but we’ll be there.”

“We parents are stakeholders in these contracts,” stressed Catalinotto. “We should be a party of interest. We want to be at the table — and we want to see what’s going on under the table!”

Marching along with the strikers were contingents from a handful of other unions. Members of the United Federation of Teachers turned out 50 people decked out in blue hats and marching with a union banner. The Transit Workers Union Local 100’s delegation, led by union president John Samuelson, carried the local’s flags. Along with other delegations, the presence of rank-and-file members from other unions showed that people are eager to find ways to support the strikers.

Hopefully, this solidarity impulse will find a lot more avenues, from the labor movement as well community and progressive groups. Public opinion is generally on the side of the school bus drivers — when people can break through the media’s uneven coverage of the strike to find the truth.

Looking for ways to elevate this struggle in the public’s mind, PIST is calling for Valentine’s Day deliveries of candy, flowers, cards and gifts to ATU picket lines. For more information, call 347-504-3310.