The following talk was presented by LeiLani Dowell, a WW managing editor, at the 3rd All India Women’s Conference that took place in Thiruvananthapuram, Kerala, India, Jan. 29-31. Organized by AIMSS, the All India Mahila Sanskritik Sanghatane, this gathering included women from across India, as well as Bangladesh, Sri Lanka and Nepal, along with other international delegations. 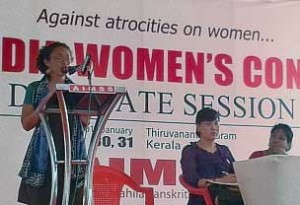 Workers World Party would like to offer our warmest solidarity to the women here today, to the women of India. We are extremely humbled and honored to have been invited to be here with you today.

In the past month, the eyes of the world have been focused on the gang rape of the young woman in Delhi. In my week here I have learned that gang rape is far too common in Indian society; that this gang rape was not a unique, isolated occurrence and happened amidst a context of multiple other atrocities, including dowry murders, trafficking of women and children, sexual harassment, child marriages and more.

It must therefore be noted that it was your movement — the thousands of young women and men going to the streets — that placed a spotlight on the conditions women in India are struggling around. While the mass protests in Delhi may have been spontaneous, it is undoubtedly true that the work of our comrades in AIMSS, over so many years, has laid the groundwork for the comprehension of and demand for women’s rights. Your struggle deserves internationalist solidarity from progressive, working-class and oppressed women and men everywhere.

As communists living in the very heart of imperialism, we at the same time denounce the hypocrisy of the U.S. media which, in racist and neocolonialist terms, attempt to paint India as a backward and so-called “savage” country only so they can promote the image of the U.S. as a bastion of liberty for women. As comrade Manik Mukherjee pointed out last night, women in the U.S. face similar atrocities, in a capitalistic, imperialistic culture that is thoroughly patriarchal, misogynistic, and commodifies women every second of the day.

Every gain won in terms of women’s rights in the U.S. was won by struggle, by the struggle of women and their male allies, and not by supposedly “generous” capitalist politicians. In actuality, these capitalists spend an enormous amount of time, energy and money attempting to roll back every gain won by women.

In the U.S., the government allowed the Violence Against Women Act to expire on Jan. 1, after 18 years of being a codified federal law. This is not because the law is no longer needed.

To give an example, this August a young high school student in the state of Ohio was gang raped by members of the high school’s football team. Rather than pursue justice for the teenager girl, city and school officials engaged in a cover-up in an attempt to save the reputation of male scholastic sports.

As the U.S. wages its deadly imperialist wars around the globe, women are always the worst victims, not only in the countries attacked by the U.S., but also within the armed forces themselves. The U.S. Department of Defense recently admitted that one of every three women in the military is sexually assaulted. In U.S. civilian life, one of every five women is sexually assaulted. This figure is lower than that in the military, but it is still unbearably high.

All of this is to say that the continuing second-class status of women must be fought, and is being fought, by women and men all around the globe.

Workers World Party follows the teachings of Engels in our analysis of the woman question. He explained that the subjugation of woman was the first building block of an economic system based on private property. These findings are excellently summarized in the “Women in History” exhibition at this conference.

Consequently, we believe that only the eradication of private property and the building of a communist society worldwide will eliminate all vestiges of male supremacy and women’s oppression.

Today, much of the world is engulfed in an economic crisis of the capitalists’ making, one which they themselves cannot escape due to the degenerative nature of capitalism itself. History is again repeating itself, with the capitalists attempting to solve their crises on the backs of working people. Women are always the worst hit by these efforts.

The neoliberalist policies of the U.S. and other imperialist countries have brought the lowest wages to women around the world. These policies have made them subject to sexual assault and murder, like the women working in maquiladoras in Ciudad Juárez, Mexico, superexploited workers who have been raped and killed in the hundreds on their way to work. It has forced the separation of families across continents just to find work, where they often face harsh and racist anti-immigrant sentiment in the imperialist countries. It has led to atrocities such as the deaths of some 200 mostly women in a Bangladeshi factory, who burned to death after the factory they were locked into by the bosses caught on fire.

What has become clearer than clear is that capitalism has not liberated women. On the contrary, it has only heightened the oppression and exploitation of women through their labor and the commodification of their bodies.

So, as we wage war against imperialism and capitalism, we know that the women’s issues are not incidental or secondary — they are, in fact, a vital and integral component of anti-imperialist, anti-capitalist struggle. In 1868, Karl Marx said that “everyone who knows anything of history also knows that great social revolutions are impossible without the feminine fervent. … Social progress,” Marx said, “may be measured precisely by the social position of the fair sex.”

As women, we fight for women’s rights on a daily basis, as it’s essential to our very survival. At the same time, we must always connect our fight to the broader working-class struggle, and the struggle for socialism and communism.

I would like to take a moment to bring to your attention two women warriors that Workers World Party is paying close attention to and is supporting.  One is sister Dr. Aafia Siddiqui, a Pakistani political prisoner who has been held in solitary confinement for years in U.S. prisons.

After she and her three young children were kidnapped from Afghanistan, Aafia Siddiqui was tortured and abused in a series of secret prisons. She was tried in New York for attempting to shoot U.S. interrogators in one such prison in Afghanistan. In the supposed attack, Aafia Siddiqui was shot in the stomach and was the only person to be injured. Yet a U.S. court sentenced her to 80 years in prison. During the trial, the U.S. media consistently demonized Aafia Siddiqui as a “terrorist.”

Aafia Siddiqui’s supporters note that she should never have been extradited to the U.S. in the first place, as she is a Pakistani citizen and was never charged with committing a crime on U.S. soil.

The second woman I would like to mention is Lynne Stewart, a 72-year-old activist and “people’s lawyer” who is currently serving a 10-year prison sentence as another victim of the U.S.’s so-called “war on terror.” In 2005, Lynne Stewart was convicted of distributing press releases for her client, Sheikh Omar Abdel Rahman. The conviction is largely seen as a threat to other progressive lawyers, with the U.S. government sending a message that they should not accept the cases of controversial figures.

Time is running out for our sister Lynne Stewart, who has breast cancer that is spreading throughout her body. The prison has not provided her with any medical treatment, despite the fact that they knew full well of her condition even before she entered the prison.

Comrades, this wonderful and highly organized conference has provided us with true optimism that with international solidarity, organization, and commitment and dedication to struggle, we can and will win a world free of patriarchy, free of women’s oppression, free of capitalist and imperialist dictates. Long live the global class struggle and the struggle for women’s rights! Long live the woman, in her rightful place at the forefront of society! Long live AIMSS!