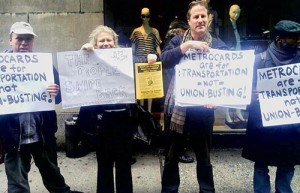 Some of the protesters outside the MTA meeting, Jan. 30.

Protesters crashed the New York Metropolitan Transit Authority’s first board meeting of the year in solidarity with the school bus drivers’ and matrons’ strike and in defense of students’ safety. They demanded that transit agency MetroCards not be issued to students as alternative school transportation.

This topic was not on the MTA’s agenda. Nevertheless, the board heard from seven speakers who used the public comments section of the meeting to denounce the MTA’s collusion with New York’s billionaire Mayor Michael Bloomberg. The mayor provoked the Jan. 16 strike by eliminating the union’s seniority list from the contract, which jeopardizes the children’s safety.

The fact that the board’s agenda omitted the strike issue did not mean the MTA was unprepared. The action, which included gathering outside the meeting with placards beforehand, had been advertised on Facebook and Occupy sites. So the transit agency stationed police and security guards on the street where people lined up to get into the meeting.

The signs protesters brought — “MetroCards are for public transportation, not union busting” — were confiscated and not allowed into the meeting where television cameras gathered in a press pool.

The MTA’s hand-picked board of bankers, politicians and other representatives of the 1% want no media coverage of the considerable solidarity for the school bus workers represented by the parents, teachers and members of Occupy Wall Street who showed up. Parents were represented by Parents to Improve School Transportation, the group that also organized the Feb. 2  electrifying “Solidarity Car Caravan for the Striking School Bus Union.”

The primary point made by parents and others during the meeting was that the MetroCard alternative, especially for special needs students, was both unsafe and a violation of these students’ right to have safe access to education.

Johnnie Stevens of PIST told the board, “My son is a special needs student, and he has directions from his doctor specifying that he cannot be in a crowded situation. Well, I just came from the train and it’s extremely crowded.”

Stevens explained that the doctor’s directions were part of his son’s Individualized Education Program — a mandate under federal law spelling out how to maximize access to education for special needs students. The school bus and the matron on it are an integral part of those mandates, as specified in the Individuals with Disabilities Education Act.

On top of the access issue is the safety issue. This was dramatized by the battle the Transport Workers Union — whose members also spoke at the meeting — has been fighting with the MTA over how to increase safety after the recent spate of subway passengers pushed to their deaths from platforms onto the train tracks. To reduce deaths, the union has begun to slow down trains when they enter a station.

Stevens mentioned this in his comments, that at the exact moment the Department of Education is passing out free MetroCards to special needs students, “We’re talking about people being killed on the train. We’re talking about putting barriers up on the subway platform.”

Joe Thierren, a New York City schoolteacher, said the city’s scheme to make MetroCards available to special needs students is “putting them in an unsafe situation” and that the MTA’s participation in that was “supporting Bloomberg’s union busting of the striking school bus workers.”

Occupy Wall Street activists spoke at the meeting, too. William Lipsey told the board that it should “not be in the business of union busting. If you want to give out free MetroCards, there are probably a million unemployed people in New York City who could use the assistance to find employment.”

Members of PIST also handed out a media statement at the meeting. Referring to the mix of subways, buses and cabs the students and their families are now forced to utilize during the strike, it said in part: “Isn’t it easier just to include the EPP [seniority list] in the city bids and let the school bus drivers and matrons keep their jobs — rather than throw students and their families into this chaos?”

PIST member Stevens put it this way to the MTA board: “MTA is a party to this — and you should be a party to getting Mayor Bloomberg back to the table so our kids can go back to school.”