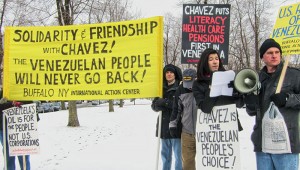 Ten days of actions and meetings in the United States and other countries began on Jan. 22 in solidarity with the Bolivarian Revolution in Venezuela. Its leader, President Hugo Chávez, is continuing his recovery from cancer surgery in Cuba. The postponement of Chávez’s inauguration for another term as president, attempts by the Venezuelan oligarchy to undermine the government, and bourgeois excitement at the prospect of Chávez’s demise were the impetus for the International Action Center to call these days of solidarity and demand no imperialist intervention in Venezuela.

In Boston on Jan. 22, a chilly gathering outside the Venezuelan Consulate was warmly received by consulate staff as activists with signs, banners and chanting took center stage. The Spanish television channel Univision covered the demonstration, as well as media inside Venezuela.

In New York City, despite temperatures in the 20s, pro-Chávez forces, including Venezuelans, came out Jan. 23 during a work day for a very spirited noontime demonstration in front of the Venezuelan Consulate. Only a handful of anti-Chávez protesters dared to turn up. Lots of media came, including Reuters, Univision and Spanish-language CNN.

In Los Angeleson Jan. 24, demonstrators held a noontime rally at the downtown Federal Building despite pouring rain. The demonstration included representatives from the progressive Iranian community, Peace and Freedom Party, and the Occupy movement. IAC organizers were interviewed by the Final Call.

A teach-in and discussion were organized in Tucson,Ariz., on Jan. 25. A solidarity rally held in Buffalo, N.Y., on Jan. 26 was endorsed by Burning Books, the International Action Center and the Latin American Solidarity Committee. On Jan. 27, the film “The Revolution Will Not Be Televised” was shown and discussed at the Solidarity Center in Durham, N.C., along with a potluck dinner of Venezuelan cuisine.

Events are also planned in Detroit, Milwaukee and Philadelphia, as well as Vancouver, Canada, and Sydney, Australia. For more information, go to iacenter.org