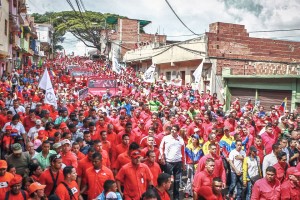 “The people’s love for Chávez continues.”

This is not a quote from a worker in Caracas. Nor from a revolutionary anti-imperialist fighter. This is the title of a New York Times opinion video dated Jan. 23. Whether it was laced with cynicism and full of sarcasm or not, it is the absolute truth.

No other conclusion could be made by either the friends or the enemies of the Bolivarian Revolution as the streets of Venezuela filled with over a million people on Jan. 23. It was indeed a good day for those around the world who struggle to break from U.S. imperialism.

In a resounding show of support for President Hugo Chávez, Vice President Nicolas Maduro and the revolutionary process sweeping Venezuela, the masses of the country poured into the streets in record numbers under the slogan, “The people will never be betrayed again,” to commemorate Jan. 23, known as Democracy Day.

It is a historic day for Venezuela. On Jan. 23, 1958, a military and civil movement overthrew the brutal and repressive dictatorship of Marcos Jimenez.

The date has historically been celebrated with many events in Venezuela. But after the wealthy right wing called for a march on Jan. 23, the date took on greater significance. The wealthy called for the march to “reject the unconstitutional measures” of the government. This is part of their many efforts to destabilize and sabotage the Chávez government and to roll back the revolutionary gains of the Bolivarian movement. They have been emboldened since Chávez has been in Cuba, recovering from cancer surgery.

According to Venezuelaanalysis.org, the major left party, known as the United Socialist Party of Venezuela (PSUV), and other popular sectors organized for the march. The right wing then cancelled its main march; a mere 6,000 turned out in the wealthy Caracas neighborhood of Miranda Park, where they felt most comfortable.

In Mérida, with a population of only 300,000, a large pro-government march was held on Jan. 23, the second one that week. Earlier, 4,000 people had demonstrated to defend Cuba after right-wing students burned a Cuban flag and an effigy of Fidel Castro.

The demonstration in Caracas gathered in three main points around the city and marched to a neighborhood that is itself rich with a history of struggle, aptly named January 23.

This writer had the good fortune to visit the neighborhood in a solidarity delegation from the U.S. in 2005. Community leaders and activists told our delegation of the long history of revolutionary struggle in that neighborhood. Pictures of Che Guevara, Fidel Castro and of course Hugo Chávez filled the walls, many faded from years in the Venezuelan sun.

Contingents marching this year included those organized by unions. One of their leaders, Francisco Torrealba, stated that his organization had mobilized 35,000 workers in defense of the Bolivarian Revolution. The Bolivarian militia and the social missions that organize for the people’s well-being also met at various points and marched.

Social media organized a “chain marathon” to report on the marches happening throughout the country.

The main chant throughout the day, which was also picked up in events held in the U.S., was “Todos somos Chávez” (“We are all Chávez”).

At the end of the historic march, Venezuelan leaders spoke on the significance of January 23. Journalist Jose Vicente Rangel declared, “We have to be clear that 23 January is a symbol of a people who don’t give up.”

When Vice President Maduro took his turn to speak, the people chanted, “With Chávez and Maduro the people are secure.” Maduro spoke of the significance of a people who have woken up after being “tired of torture, disappearances, misery, lack of education, unemployment, and a state that was called democratic but only had that name because the Venezuelan bourgeoisie called it that.”

The gains the people have made under Hugo Chávez are why the Bolivarian Revolution is secure today. The masses have had a taste of what is possible when a government has the political will to defend the interests of the workers over the interests of finance capital.

Oil in Venezuela is now at the “service of the Venezuelan people,” as Chávez and Maduro have stated. That fact puts fear in the hearts of both the oil companies and the Venezuelan wealthy.

The movement in Venezuela has a long road ahead of it. U.S. imperialism will not resign itself to accepting the Bolivarian Revolution. The people in Venezuela and around the world must remain vigilant to strengthen and defend the revolutionary process there.