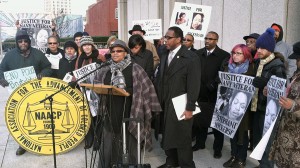 Durham, N.C.  — On Jan. 24. charges were dropped, including resisting arrest and assault on a police officer, against Stephanie Nickerson. This is a huge victory for all forces of activism and resistance in Durham, N.C., who contributed to getting the charges dropped for Nickerson and to forcing Officer Cpl. Brian Schnee to resign from the police force. Schnee had been in the department for 12 years.

SpiritHouse NC, NAACP Durham and NC State Conference, along with Workers World Party, BRICKs, Inside-Outside Alliance and many other activists and family members all took part in building community support to make this victory for Nickerson possible. All these groups contributed to organizing public forums against police brutality and rallies on several cold Tuesday afternoons in front of the Durham Police Department. 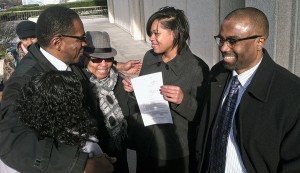 As police brutality is on the rise and capitalism approaches a dead end and its own cliff, we have been fighting tooth and nail for our comrades in many places. As Lamont Lilly of the Durham Branch of Workers World Party told this writer, “We’ve been highly engaged in Baltimore and New York, Wisconsin and Detroit. We traveled by car and plane as revolutionary change agents, standing in solidarity with others as they lead their own struggles.”

With words from Malcolm X and connecting our national struggles with those that are local, he further explained that before our own eyes “the chickens have come home to roost. The struggle has hit home now.” And that it did last Oct. 28 when Stephanie Nickerson was beaten and bruised by police for having a voice, for standing up for herself as well as others, for asserting her legal right to see a search warrant while in a friend’s home.

Winning justice for countless others like Stephanie Nickerson reflects the words that the Rev. Dr. Martin Luther King Jr. spoke in his 1963 “I Have a Dream” speech:  “A check has come back marked ‘insufficient funds.’” The check refers to equality and freedom supposedly guaranteed in the Constitution and Declaration of Independence, and “insufficient funds” refer to the hypocrisy of these words where African Americans and other people of color are concerned.

Durham was home to one of the largest and most active communities during the Civil Rights movement, The Hayti. At one point, North Carolina was the epicenter for resistance during this historic movement and other struggles throughout history, including the Greensboro sit-ins in the 1960s, the right to self-defense taken by the Wilmington 10 on Feb. 6, 1971, and the Warren County PCB protests in 1982. Major victories have been won from these actions, and they all served as a turning point in the history of oppressed people everywhere. Winning justice for Stephanie Nickerson is an outgrowth of these inspiring actions that taught us to fight injustices against our brothers, sisters and comrades.