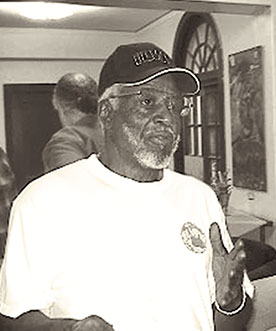 Leo Robinson, a working-class fighter on the West Coast docks and in the community, and an internationalist, succumbed to cancer on Jan. 14 at the age of 75. He is survived by his spouse and partner, Johnnie, six children and by militant rank-and-file longshore workers who learned how to fight from the bottom up from Leo’s example.

The ILWU was established when the port bosses were forced to recognize the union after the 1934 San Francisco general strike and the famous pledge by strike leader Harry Bridges ensuring that Black workers would have an equal place in the union and for waterfront jobs.

In his 20 years on the Local 10 Executive Board and throughout a lifetime of union activism, Leo Robinson lived and breathed internationalism and class struggle.

In the 1970s and 1980s, Leo’s leadership exercised the power of the U.S. working class on the side of the South African liberation struggle and against the racist apartheid regime. In July 1976, after the Soweto youth uprising was massacred, Leo introduced a resolution to Local 10 for a boycott of goods to and from South Africa.

In April 1977, he put that resolution into action. A 5,000-person strong community picket was honored by ILWU Local 10 members stalling South African cargo at San Francisco’s Pier 27 for two days — at a time when then imprisoned Nelson Mandela and the African National Congress were slandered as terrorists by the U.S. government. South African cargo sat on the Dutch ship, Nedlloyd Kimberly, for 11 days in 1984 when longshore workers from Locals 10, 34 and others honored the community protest. Mandela recognized the pivotal role of the ILWU when he spoke at the Oakland Coliseum at the end of his 1990 U.S. tour. What started as a union resolution became part of a global struggle that helped to change U.S. policy.

Leo used his experience and these precedents to politically defend the Occupy movement’s Dec. 12, 2011, West Coast port shutdown that began shaping a new way for the working class to fight in the high-tech age.

Promoted speaking in our own name

On Oct. 17, 2004, at the Lincoln Memorial in Washington, D.C. — just a couple of months before the U.S. presidential elections — the Million Worker March called on labor to mobilize in its own name. The MWM pulled against the capitalist election frenzy. Robinson, a convenor and the largest benefactor, drafted the now iconic T-shirt front and back with the MWM program that stands as a working-class agenda today: Bring the troops home, now; Universal health care; Enforce all civil rights; Stop dismantling public education; Slash the military budget; National living wage; Hands off social security; Workers’ right to organize; Repeal Taft-Hartley; Stop corporate greed and offshoring jobs; Repeal corporate free trade agreements; Amnesty for all undocumented workers; Truth in media; Preserve and restore the environment; and Tax relief for the working class.

Although his concern was international — writing the ILWU position paper on Palestine calling for recognition of the Palestine Liberation Organization, opposing the Colombia free trade agreement, leading Coalition of Black Trade Unionists delegations to Cuba and a first labor delegation to Nicaragua — and national with the MWM and pushing forward the ILWU to be the first union to recognize the Martin Luther King Jr. holiday, and founding the Northern California CBTU, he also strengthened the union. He founded the African American Longshore Coalition “in March 1992 to address the racism, sexism and other forms of discrimination of the Longshore Division up and down the West Coast for the purpose of resolving such problems internally,” without relying on the capitalist state so often used against the working class. (tinyurl.com/ad76oz5)

Brenda Stokely, MWM Northeast co-organizer, said: “My first recollection of Leo Robinson was during a Coalition of Black Trade Unionists convention. He was a force that was able to move progressive resolutions through the CBTU process and garner the needed support in spite of strong opposition.

“He embodied the courage and commitment to his class and always stood unwaveringly on the side of the desires and aspirations of that class. His skills as an effective working-class strategist, tactician and organizer encouraged others to never falter in the face of vicious opposition.

“He was vigilant in ensuring that Local 10 ILWU maintained its revolutionary character; remained capable of stopping their employers’ attacks to weaken their contracts; and was able to exercise their right to successfully carry out both political and economic strikes.

“He led a Local 10 delegation to the Labor Party’s founding convention. … Leo will forever be an inspiring model of revolutionary leadership for me and many others.”

“Leo was an extraordinary person, worker, intellectual, trade union activist, freedom fighter, thinker, organizer, orator, movement builder and teacher — and a superior domino player — ruthlessly committed to being a fighter for the working class, active in community as well as being an internationalist. He gave generously of his time and money in the fight for economic and social justice for the oppressed and working class,” said Clarence Thomas, fellow ILWU Local 10 member and MWM co-chair.

A tribute to Leo Robinson’s life at the San Francisco International Longshore and Warehouse Union Hall is planned for March.