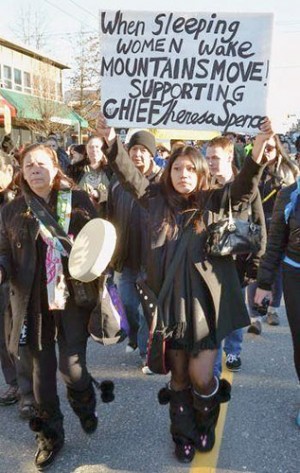 Idle No More Boston drew supporters to a rally and drum circle on Jan. 11 — one of hundreds globally — in solidarity with the Idle No More movement of First Nations, dedicated to preserve and protect tribal lands and treaty rights in Canada. Rallies were timed to coincide with scheduled meetings between First Nations leaders and Canadian Prime Minister Stephen Harper. People at the rally expressed support for Chief Theresa Spence, of the Attawapiskat First Nation of Northern Ontario, who was in day 39 of her liquid-only fast.

The Idle No More movement has swept through Canada as a result of wides­pread opposition to Bill C-45, which was signed into law on Dec. 14 by the Canadian Parliament. This law virtually abrogated many historic treaties and eradicated environmental protections for nearly one-half of the land mass of Canada, which allows oil exploitation on sacred ground. Supporters worldwide have been holding rallies, blockades and round-dance flash mobs to show support.

Juan Gonzalez, of the Council of Mayan Elders and United American Indians of New England, led the rally, declaring: “We need to support the issues here in Massachusetts as well as in Canada, Mexico, Australia and everywhere. Mining companies are destroying our sacred lands. Canada wants to build a pipeline right through our land. We must oppose this!” Dee Ko (Cherokee/Mohawk) decried the Canadian Parliament’s proposed treaty violations, stating, “We have been idle too long. There has been too much white privilege. We have to act!”

The rally drew support from UAINE, Occupy Boston’s Decolonization Working Group, the United National Antiwar Coalition and others. Workers World Party Boston delivered a message of solidarity. Idle No More Canada has called another global day of solidarity for Jan. 28.