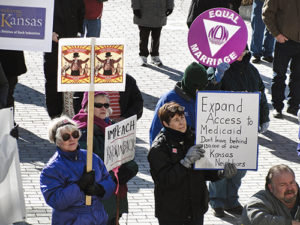 Members of many progressive organizations representing those struggling for the rights of women, the LGBTQ community and immigrant rights, as well as unions, faith-based groups and others from throughout Kansas, held a People’s State of the State noon rally on the steps of the state Capitol in Topeka on Jan. 14, just before the convening of the 2013 legislative session. The majority in this legislature are the most racist and right-wing in recent memory. Along with Kansas Gov. Sam Brownback, they are intent on implementing deep austerity, union-busting and other attacks on poor and working people. But those at the People’s Rally hoisted banners and signs from their respective organizations and chanted “Stand up, fight back.” They have no intention of stopping their resistance and are continuing to build solidarity and a fighting people’s movement.