School bus drivers and parents joined together on Jan. 6 in a rally at City Hall to demand that Mayor Michael Bloomberg and Schools Chancellor Dennis Walcott back off from plans that would destroy the bus drivers’ seniority and lead to unsafe conditions for children.

Some 152,000 children in this congested city rely on yellow school buses each day to get to and from classes. Many are children with special needs who must attend schools that may be far from their neighborhoods. The school bus drivers and attendants, known as matrons, have years of experience in safely transporting the kids. They are represented by Locals 1181 and 1061 of the Amalgamated Transit Union and Teamsters Local 854.

In December the Department of Education announced it would be accepting competitive bids for 1,150 of its routes for students with and without disabilities. The new contracts — including some non-union bus companies — would no longer contain job security clauses, known as employee protection provisions, that ensure hiring and hours based on industrywide seniority. 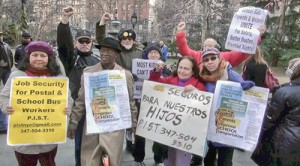 The bus workers — and thousands of families — are not taking this lying down. The workers are fighting to save their jobs with decent wages, hours and pensions. The parents want to be sure that experienced, trained drivers and matrons shepherd their kids to and from school.

One of the speakers at the rally was Sara Catalinotto, a founder of Parents to Improve School Transportation. PIST has been fighting the school board since 2010 to set up safer, shorter, more sensible routes. It rejects the city’s tactic of pitting parents against bus drivers in order to implement a cost-cutting plan in the present austerity climate.

“The threat to school transportation,” said Catalinotto, “does not come from the bus workers, but from the authorities in charge who are constantly looking to cut the budget. Bloomberg and [Gov.] Cuomo have something against civil service. But parents appreciate having people with knowledge and experience handle our children — and our other public services.

“Parents who deal with Special Education know how to complain when our children miss their services due to stingy policy decisions. We don’t accept that it’s O.K. if a child is two hours late to school. It’s not O.K.: that’s why we fought the long, chaotic bus routes the Department of Education created in September, with its first round of ‘competitively bid’ companies.”

ATU Local 1181 leaders are saying that, while a strike would be “the last card we want to play,” they are prepared to walk out if the city does not restore job security provisions in the bidding contracts.

If they do strike, indications are that many parents of special needs kids will support them.

In a Dec. 28 statement to parents entitled “Why is the safety of our children up for bidding?” PIST wrote: “The NYCDOE admitted in writing that they want to cut the cost of employing people who provide a vital service to 15 percent of schoolchildren: yellow school bus drivers, matrons/attendants, and mechanics. The authorities appear willing to risk a legal strike at the cost of our children’s ability to get to school. … Of the two parties to the union contract, we have found that it is the union that agrees with parents on not wanting to throw away standards, while the authorities seek to sell our children’s safety to the lowest bidder.”

Several other parent organizations have been circulating these views on the Internet and social media as well as in schools. Leaders of New York City Parents Fed Up with Transportation Troubles, Common Sense Busing and the Queens County Parent Autism Coalition were among signers of an open letter to local authorities in charge of school busing. The letter demands that the real stakeholders have a presence in the bid negotiation process. For more information, contact [email protected] and go to http://nysaflcio.org/Safety1st/.