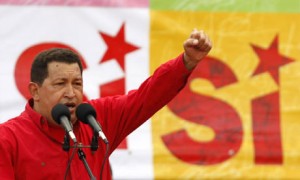 Since Venezuelan President Hugo Chávez announced the recurrence of the cancer that he has been battling since 2011 and the need for additional surgery, he has been the object of world solidarity. He told the Venezuelan people on Dec. 8 that his last medical examination showed that malignant cells recurred at the site in his abdomen where he had been treated earlier. As a result, he needed a fourth operation.

This time, however, the outcome could be disability or even death. As the Constitution mandates, he designated current Vice President Nicolás Maduro to stand in during the treatment and as his successor should he be unable to return to office by the Jan. 10 Inauguration Day. He asked Venezuelans to elect Maduro president if new elections are needed.

Chávez then flew to Havana, Cuba, in preparation for surgery on Dec. 11. A skilled Cuban medical team had the difficult task of treating and trying to save the life not only of an individual, but the hope of millions of people throughout the region and the world.

Why is Chávez important?

One leader is not the revolution. It is the masses and the process of revolution that create leaders, and not the other way around. Leaders, however, can steer the revolution, coordinate resources and speed it up. Leaders are also an important part of revolutions when they are the product of the masses’ aspiration.

Chávez is such a leader. He has been able to gather and concentrate the desire of the Venezuelan people for social justice and equality and turn it into action. Under his presidency, the government has lifted the lives of all Venezuelans, dedicating an impressive 43.2 percent of the budget to social programs. Illiteracy is now nonexistent in Venezuela and poverty has been reduced.

Venezuela is a dynamic country where people participate actively in forming their future.

Along with improving the quality of life of millions of people, Chávez’s government has shown that Simón Bolívar’s dream of regional integration could be a reality. Together with revolutionary Cuba, Venezuela impelled the formation of anti-imperialist regional associations like the Bolivarian Alliance for the Americas (ALBA). These associations have been crucial for the improvement and cohesion of the region, including other Caribbean nations.

Chávez and Venezuela inspire the world by standing up against the U.S. imperialist monster. They show that nations can win and maintain national dignity, independence and sovereignty in the face of criminal imperialist interventions.

That is why the news of his illness has moved people to almost personal suffering — what one feels for a family member — from Venezuela and Latin America and the Caribbean to Africa, Asia, the Middle East and Europe.

Chávez is close to the hearts of millions. One can see their feelings in the faces of women and men of all ages in the photos of gatherings in Venezuela and hear it in their testimony.

Chávez, who of all the Latin American presidents has used social networks extensively, has been inundated with messages of well-wishers in his “chavezcandanga” Twitter account.

Beyond Venezuela, Ecuadorean President Rafael Correa canceled his appointments and flew to Havana to be with Chávez before his surgery. All the presidents of the ALBA countries have been in constant communication with Chávez’s representatives. They and many other heads of state and multiple organizations have organized solidarity events with Chávez and the Venezuelan people.

Most of these events have been religious, of every kind. In the context of sadness and individual impotence in the face of an unknown outcome, it reflects the importance of religion for millions of people in Latin America. At a service in a Venezuelan mosque, Vice President Maduro said that 58 mosques in Muslim countries were holding services for Chávez’s health that day.

These services are acts of solidarity with the Bolivarian Revolution and its aim of liberation from imperialism. Uruguayan President José Mujica, who is not religious himself, sent Chávez a letter, saying: “As you know, I am not a believer, but I have asked some friends to organize a mass so that those who wish to express themselves religiously for your health have a place here in our country. I will go with them.”

In Cuba, it has been reported that both Raúl and Fidel Castro visit him daily and talk with the Chávez family, who are by his side.

Elections in Venezuela without Chávez

The regional elections held Dec. 16, without Chávez’s physical presence, selected 23 governors and 237 representatives to the Legislative Council, including eight representatives of Indigenous regions.

The candidates from Chávez’s PSUV party won in 20 of Venezuela’s 23 states, gaining the governor’s house in five states formerly in the opposition’s hands. This is a significant popular victory and a step forward on the road toward socialism.

This will be no easy task. Even a fully recovered Chávez would face a complex process with enemies inside and outside Venezuela, particularly U.S. imperialism and its local stooges. We must not forget that Venezuela is still a capitalist country, and socialism is still an ideal, although there are definite plans for its construction. All the socialist forces everywhere should be paying close attention to this process and help sustain it and defend it from the imperialist forces.

This is the time that people around the world, and particularly all the progressive forces inside the United States, need to show a strong commitment to and solidarity with the Venezuelan Bolivarian Revolution and its leader, Hugo Rafael Chávez Frías.

Chávez, we are all with you!