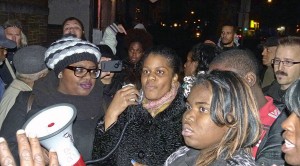 Philadelphia community activists organized by Free the Streets marched on Dec. 7 from 61st and Market streets, near where Derrick “Browny” Flynn was killed by Philadelphia police, to the 19th Police District, where friends and family demanded to know why he was killed last Nov. 11. Several speakers, including Browny’s cousin, Shanise Jackson, and Building People’s Power community resident, Patrice Parmstead, spoke in outrage that nine “police clergy” [local ordained ministers who work with the police] chose to line up in front of the precinct’s doors, defending the terror of the police instead of the human rights of the community’s residents.