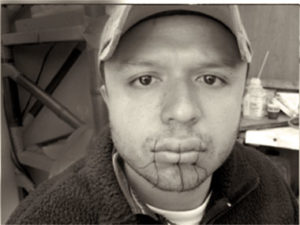 Colombian Labor Union members of Association of Injured Workers and
Ex-workers of General Motors Colmotores – Asotrecol have sewn their lips shut in a hunger strike. GM fired workers who suffered workrelated
injuries, cutting off their source of income and medical care. Shown here
a member of the strike in August.

For almost 500 days, Asotrecol, the Association of Injured Workers and Ex-Workers of General Motors Colmotores, has been fighting for justice. Colmotores, the GM assembly plant in Bogotá, Colombia, is a house of horrors.

After any length of time, conditions on the job destroy a worker physically. GM typically fires workers unable to work, leaving them with no source of income. GM takes advantage of the political climate in Colombia, the most dangerous country in the world for trade unionists.

Asotrecol took action on Aug. 1, 2011, setting up an encampment outside the U.S. Embassy. Workers targeted the U.S. government because of its 26 percent ownership in the company and its role in bailing out GM.

One year later, Colmotores still refused to meet with workers to discuss their demands, including reintegrating them into the workforce on jobs they could do with their disability or providing a pension for those unable to work. The 13 Asotrecol members still occupying the embassy, including its president, Jorge Parra, began a hunger strike, sewing their lips shut.

Twice they suspended the hunger strike. The first time was after GM executives in Detroit agreed to participate in mediation, supervised by the U.S. Federal Mediation Service and with the intervention of the United Auto Workers. But Asotrecol found their offer of compensation “insulting” and resumed the hunger strike.

Parra came to Detroit to seek a meeting with GM. He and the Asotrecol members in Bogotá resumed eating after UAW President Bob King expressed hope that he could work out a settlement with GM.

On Nov. 17, after leaving a meeting with King empty-handed, Parra announced that he would sew his lips shut again. Three days later, he made good on his promise. Three of the occupiers in Colombia have also sewn their lips shut.

In a Nov. 21 statement, Parra made it clear that “because of the multiple occasions that we have suspended the hunger strike without achieving a resolution, we will not lift the hunger strike until there is a final and just resolution to our demands.” He said, “Due to the multiple times that General Motors Colmotores has dismissed the validity of our claims and attacked our motives, we demand that this situation be resolved directly with the parent company, General Motors, not with Colmotores, nor in Colombia.”

When they have a chance to hear Parra speak, rank-and-file autoworkers in Detroit feel a sense of solidarity with the Colombian workers. Melvin Thompson, a member and former president of UAW Local 140 at the Chrysler Warren Truck Assembly Plant, began his own hunger strike on Nov. 20 and is vowing to consume only liquids until Asotrecol wins justice.

On Nov. 28, Parra, Thompson and several dozen supporters picketed and rallied outside GM world headquarters in Detroit. That day, U.S. Secretary of State Hillary Rodham Clinton was presenting the State Department’s Award for Corporate Excellence. GM, one of 11 finalists out of 82 contenders, lost to Intel.

GM was nominated for supposedly advancing human rights in Uzbekistan. In fact, international labor activists have criticized working conditions in GM’s plant there, and GM has refused to allow the International Labor Organization to conduct an inspection.

Parra challenged GM CEO Dan Akerson to an “unfiltered public debate.” In a moving speech, Parra reminded supporters that “bodies may die but the working-class struggle will never die.” In recent weeks, he has supported the class struggle by attending protests at Walmart and demonstrations in solidarity with Palestine. He also joined actions supporting Jerome Jackson, who is disabled, and facing eviction from his wheelchair-accessible home.

Activists will continue to demonstrate outside GM headquarters, dealerships and other locations to hold the company accountable for its crimes against Colombian workers.