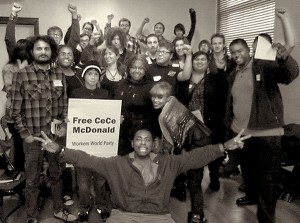 Youth and students meet and strategize during WWP conference.

Workers World Party held its annual national conference here this year at a Native community center. Members of numerous organizations, all part of the working class, attended and gave speeches of solidarity and information riddled with passion.

Among the many speakers were youth — tired of the dead-end offerings of capitalism — who took to the streets to stand up for workers and organize in their own communities.

Cameron Aviles, founder of Building Revolutionary Conscious Knowledge, opened the conference with a poem he wrote. Summer Smith, of the Revolutionary Students Union in Utah, and Dinae Anderson, a high school organizer in New York, were among the many speakers, including this writer, who participated in a panel on why we joined WWP.

The many failings of capitalism have become a painful truth that youth can no longer turn away from. At a separate workshop panel catering to youth, the many issues we face were discussed in small groups after we introduced ourselves and the organizations we belonged to.

The root concern that seemed to be the common thread in all the issues discussed was the increasing rate of police brutality. Ideas were then formulated on how to raise awareness through a change of language, like referring to “police brutality” as “police terrorism,” and informing people of the many legal and illegal tactics that police are using to carry out these terrorist acts in communities nationally. Through this information, a local organization that people can become involved in — be they victims of police terror or just those concerned — can be formed.

Another major step toward organizing was networking youth organizations that are now working together nationally to keep each other updated on events and community issues as they arise. WWP national youth fraction conference calls are a major part of keeping together and spreading consciousness. The calls are conducted from Durham, N.C. For inquiries on youth fraction conference calls, contact [email protected]

Tachae Davis is one of the newest members of the Detroit WWP branch.