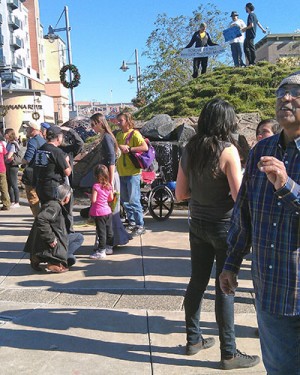 Indigenous people and their supporters gathered in Emeryville, Calif., on Nov. 23 at the site of the Emeryville Shellmound, the oldest and largest shellmound burial site of the Ohlone people. The annual event here is in protest of a shopping mall that has been built on top of the sacred shellmound, destroying and desecrating it. Now the mall owners call it private property and refuse to allow the Ohlone people and their supporters to distribute fliers on the sidewalks of the “private” open-air mall. Security guards called police on community supporters who were asking shoppers to take their business elsewhere.