Within days of the start of Israel’s latest aerial offensive on the imprisoned people of the Gaza Strip, solidarity protests with the Palestinian people were held in over 300 cities worldwide. Demonstrations have continued since the Nov. 21 cease-fire agreement.

From New York to Chicago to Los Angeles, protests in the U.S. were marked by demands to end U.S. funding for Israel’s occupation of Palestine. Three demonstrations in San Diego, Calif., — two at the Federal Building and another outside a Zionist event — called for justice for Palestine and the right of Palestinians to return to their homeland. Detroit-area demonstrators fighting massive foreclosure evictions denounced the billions of U.S. tax dollars sent to Israel, money that is funding the destruction of homes in Gaza. Activists from the Occupy Wall Street movement took part in demonstrations in over 50 U.S. cities, including several in the South. Jewish activists participated in many protests with signs saying “Not in my name.”

In Athens, the anniversary of the deadly suppression of a 1973 student uprising turned into a massive anti-Israel demonstration, with 120,000 people marching on the Israeli Consulate. In many European cities rocked by earlier anti-austerity protests, tens of thousands filled the streets in solidarity with Palestine.

Dearborn, Mich. — Hundreds of Palestinians and their supporters rallied in this Detroit suburb on Nov. 21 to support the people of Gaza against the vicious, U.S.-backed Israeli assault. Seen here, part of a large youth delegation from Workers World Party and the Michigan Emergency Committee Against War & Injustice.
Photo: Leona McElevene

The corporate media’s one-sided pro-Israel coverage was the target of protests in Scotland, where pro-Palestinian demonstrators also occupied the roof of the Scottish Parliament. Demonstrators also rallied outside CNN headquarters in Atlanta, Ga.

Pro-Gaza sentiment was strong throughout Latin America with protests outside Israeli and U.S. embassies. A common banner was “Todos somos palestina” — We are all Palestinians. Venezuela and Bolivia severed diplomatic ties with Israel as an act of solidarity with Gaza.

Demonstrators gathered in Seoul, south Korea, and Okinawa — where struggles against U.S. militarism have raged for half a century. Many protests took place in Southeast Asia. Bangkok youth held a “Stop the Killing” flash mob. Malaysian youth wore T-shirts with the slogan “Save Gaza.” Indonesian Muslim students demonstrated outside the U.S. Embassy in Jakarta. Large protests for Gaza took place in Pakistan and Bangladesh. 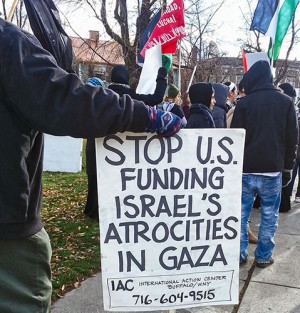 Buffalo, N.Y. — A spirited rally protesting the assault on Gaza was
held in Buffalo with students and members of the Palestinian and
Yemeni communities attending.
WW photo: Bev Hiestand

In many countries, sporting events were used to express solidarity with Gaza. Soccer fans in Turkey, Bosnia and Chechnya unfurled banners in solidarity with Palestine. German-Turkish soccer players decorated uniforms with pro-Palestine slogans.