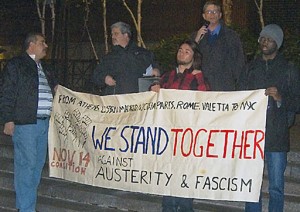 In front of the Greek, Spanish and Portuguese United Nations missions in New York, around 150 workers and progressives came out Nov. 14 to express their solidarity with the general strikes and protests against austerity in more than 20 European countries. A number of speakers pointed to how the treatment of people living in New York City’s public housing was a good example of how austerity is practiced in this country. Arthur Cheliotes, president of Communication Workers union Local 1180, a large union representing public service workers, was there. The demonstration was organized by the Greek-American Left Movement (Aristeri Kinisi) and Occupy Astoria. The protesters sharply condemned supporters of the neo-Nazi “Golden Dawn” movement in Greece.