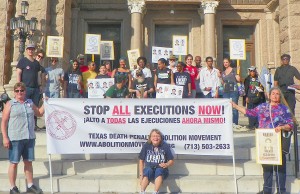 Activists from Houston who came on the Abolition Movement bus stand at the Capitol after the march — the group includes students from Univ. of Houston, the ACLU, the New Black Panther Party, the S.H.A.P.E. Community Center, Amnesty International, Workers World Party, KPFT Pacifica Radio’s The Prison Show staff, and the family of death row prisoner Howard Guidry.
Photo: Mahsa Shahru

Close to 500 death-row families, exonerees, friends and activists rallied at the Capitol and marched through downtown Austin Nov. 3 for the 13th Annual March to Abolish the Death Penalty.

Mark Clements kicked off the march by instructing the crowd that when he said, “Death row,” they were to respond, “Hell no!” Clements was arrested at the age of 16, brutalized by Chicago police, and spent 28 years in prison before finally being released for a crime he didn’t commit.

Chants echoed off the Capitol and downtown buildings, while signs and banners were held high. Shujaa Graham, Albert Burrell and Ron Keine, three death-row exonerees with Witness to Innocence, led the march, along with Clements and former Black Panther Lawrence Hayes, who spent almost 20 years on New York’s death row.

“We let [Texas] Gov. Rick Perry and every Texas legislator know that the movement to end capital punishment is building, and support [for the death penalty] is dwindling,” said Joanne Gavin, who traveled on the Texas Death Penalty Abolition Movement’s bus from Houston.

Sarilda Routier, mother-in-law of Darlie Routier, was surrounded by Darlie Routier’s family as she explained how her daughter-in-law is innocent but remains on death row. Her moving words brought a stunned silence to the hundreds present and tears to many eyes in the crowd.

Barbara Lewis, mother of former Delaware death-row prisoner Robert Gattis, spoke about hope and continuing the struggle “even if you are not rich, you are not educated, and you are not white. Never stop fighting!” Gattis’ 1992 death sentence was commuted this year from death to life in prison without parole.

Other speakers included Nick Been, of Kids against the Death Penalty, who is also Jeff Wood’s nephew. Wood was sent to death row under the law of parties, despite the fact that he had killed no one. He wasn’t even in the store when the shooting incident he was convicted of took place. Wood’s sister, Terri Been, spoke, as did the sister of Louis Castro Perez, Delia Perez-Meyer, of the Texas Moratorium Network.

Marilyn Shankle-Grant spoke for her young son, Paul Storey, and Roderick Reed spoke for his innocent brother, Rodney Reed, an African-American man who was framed for the rape and murder of a white woman, despite evidence pointing to her fiancé, a white policeman who is now in prison for sexually assaulting another woman. Reed’s mother, Sandra Reed, and friend Caitlin Adams were also present. A banner for another innocent man, Rob Wills, was held by his supporters.

When death-row families and exonerees were asked to come to the stage, more than 25 people — mothers, grandfathers, spouses, aunts, uncles, daughters, nieces and nephews, brothers and sisters — came forward, as well as several death-row exonerees.

“The determination of these people is what inspires and motivates us to continue fighting executions in this racist state of Texas, which has carried out 489 legal lynchings since 1982, well over one-third of the 1,300 executions in this country,” said Pat Hartwell, of the Abolition Movement in Houston.

The rally was chaired by Lily Hughes, the national chair of the Campaign to End the Death Penalty, and was organized by her organization, along with the Texas Moratorium Network in Austin, the Abolition Movement in Houston, and Kids Against the Death Penalty, which is based in San Antonio.

The spirit of the day was framed by Clements, who said, “This government is corrupt! Why in the world is Rick Perry still in office and Rodney Reed still in prison? Gov. Perry needs to be served a pink slip now!”