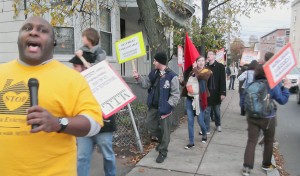 Tenants and supporters marched to the offices of Alpha Real Estate in Boston to oppose the unprecedented, forced, mass, “no-fault” evictions aimed at residents of a 300-unit apartment complex in Malden, Mass., a suburb of Boston. Those on the spirited Nov. 1 picket line chanted, “Alpha, Alpha, you can’t hide, we can see your greedy side!”

For six months tenants have been fighting to keep their housing in an ever-expanding battle. In April, soon after acquiring the rental complex for $26 million, Alpha raised rents overnight by 25 percent to 40 percent. Alpha gave tenants 30 days to accept the rent hikes or face eviction.

The Malden tenants form a multinational, working-class community, many of whom are seniors who have lived in their units for 30 years or more. Most tenants cannot afford either the rent increases or the costs of moving to a new location.

Alpha Real Estate is notorious for renting substandard, high-rent apartments to thousands of college students in Boston, and recently one of its properties was condemned by the Boston Public Health Department.

Affordable housing is not being built in greater Boston — or anywhere else for that matter. The banks, real estate companies and landlords that control housing are squeezing renters more and more as the global economic crisis of capitalism makes itself felt in every country, city and neighborhood. Low-cost public housing that people need is not being built, in part due to cutbacks in funding for the Department of Housing and Urban Development. At the same time, private industry refuses to build rental housing without government loan guarantees and the assurance of hefty profits.

Every day poor and working-class people are summoned to local courts overwhelmed with foreclosure proceedings brought by the likes of Fannie Mae, Freddie Mac, Bank of America, Wells Fargo and Deutsche Bank. People’s fightback groups like the Malden tenants union, City Life, the Moratorium NOW! Coalition in Michigan, and the upcoming People’s Power Assemblies in several cities are more important than ever.