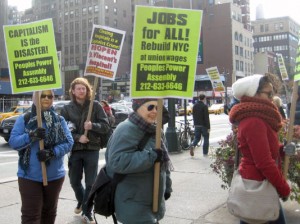 Nov. 3 — The Peoples Power Movement held a protest in the center of Manhattan in front of the James A. Farley Post Office Building on 8th Avenue and 32nd Street to point out the huge contradictions of the capitalist system and to raise a “people’s program” of fighting for power.

What was remarkable was the response from people passing by and watching.

Two younger African-American workers who had gotten out of a delivery truck raised their fists and joined in briefly with our chants: “What do we want? People’s power!”

Some demonstrators from hard-hit New Jersey found a way to cross the Hudson so they could participate in the action.

Tourists, some probably unable to go home because of the flight delays, posed with the demonstrators to have their photos taken. One liked the placard contrasting how socialist Cuba successfully copes with disasters and how the capitalist U.S. flops at doing it.

The demonstrators distributed leaflets with statements from the Peoples Power Assembly, which raises demands for coping with the crisis, These demands are reproduced on the workers.org website.

A representative of Workers World Party distributed the party statement on the crisis, also available at workers.org.

The demonstrators marched downtown and west to the Chelsea neighborhood, where some participated in a volunteer neighborhood action in the public housing west of Ninth Avenue on 25th Street, offering blood pressure testing for the residents, whose power had just come on the night before after five days without power or water.

There was also a protest today across the Hudson River in Jersey City at City Hall around demands for storm relief.