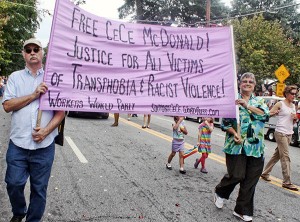 Tens of thousands of people lined the streets to cheer and applaud the huge parade that filled Peachtree Street and ended at Piedmont Park, celebrating Pride 2012 in Atlanta. Among the many floats and contingents marching Oct. 14 were LGBTQ student groups from numerous local universities and colleges, multiple Latino/a and Asian organizations and dozens of worker contingents from many of Atlanta’s largest businesses. Workers World Party members carried a banner that read “Free CeCe McDonald! Justice for All Victims of Transphobia and Racist Violence!” Young people in particular greeted the banner with chanting, often running up to hug and thank those carrying the banner for bringing the struggle of CeCe — imprisoned in Minnesota for defending herself against anti-trans violence — to the Pride event. Others, who had been unaware of the case, took informational leaflets and could be seen sending photos of the banner to their friends via cellphone.