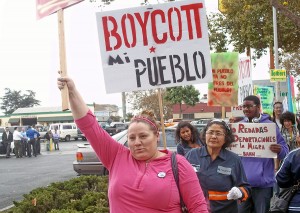 Oakland, Calif.  — Chants of “Mi Pueblo is a racist business!” and “Boycott Mi Pueblo!” echoed loudly on High Street, a very heavily traveled boulevard in East Oakland, as more than 150 people picketed this market chain store which is located in several Bay Area Latino/a communities. The protesters demanded justice for the workers who are trying to organize a union and being threatened with job loss and possible deportation via the anti-immigrant “E-Verify” system.

According to organizers of the Dignity and Resistance Coalition, a local coalition of Latino/a organizations and political activists, Mi Pueblo is participating with Immigration and Customs Enforcement in E-Verify, a government database that would allow the company to refuse work to undocumented workers. Mi Pueblo management is allowing the government to launch an I-9 Audit, also known as a “silent raid,” that would identify undocumented workers and lead to their firing and possible deportation.

Mi Pueblo workers in San Jose, Oakland and other parts of the California Bay Area are involved in a union drive with the help of organizers from the Food and Commercial Workers union. Worker activists have been unfairly fired, threatened and intimidated by the owner, Juvenal Chavez, store managers and the federal E-Verify policy.

The Dignity and Resistance Coalition, which organized a successful demonstration through East Oakland on May 1 for immigrant and workers’ rights, has called for a boycott of Mi Pueblo stores. Educational flyers calling for an end to collaboration with ICE and the Department of Homeland Security, a halt to all unfair labor practices and the rehiring of all fired workers were passed out to shoppers during the Oct. 20 action. A group of Latino/a youth boldly marched up to the door of the Mi Pueblo market, chanting, “Mi Pueblo is a Deportation Center!” The picket line was warmly received by passing motorists, who honked their support.