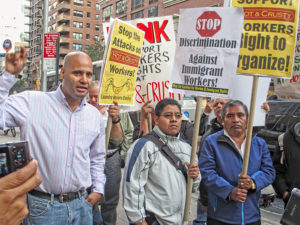 On Oct. 18, about 100 people, including Hot & Crusty food workers and a wide spectrum of union supporters, gathered in front of the former H&C store at 63rd Street and Second Avenue in Manhattan to demand that the owners meet the demands of the immigrant workers. A speaker from the Laundry Workers Center stressed, “We are going to continue organizing. … We will never back off our mission!” Chants included “Asian, Latino, Black and white, workers of the world unite!” Picketing at 63rd Street has continued daily for many weeks, with rotating protests at other sites like Europan Cafes owned by the same investors.

After a six-month organizing drive, the mostly immigrant workers at Webster Carwash in the Bronx, N.Y., voted to join the Department Store Union (RWDSU). The workers charge that Lage Management Corp., which owns several dozen carwashes in New York City, stiffs them by not paying the minimum wage. El Salvadoran immigrant Ernesto Salazar makes $6.50 an hour, which is 75 cents below the federal minimum wage. (But he was making $5.50 an hour before the unionization drive.) Lage has a history of shortchanging workers; in 2009 the firm had to pay $3.4 million in back wages and damages to 1,187 current and former workers. “This is a time for immigrant workers to earn a voice through their union — to speak up to their bosses,” said Salazar. “The union will support us in pushing to raise wages. You can’t afford to live here on the amount they pay us.” (New York Times, Oct. 22) Working with RWDSU are two advocacy groups, Make the Road New York and New York Communities for Change, which are taking the fight to two other Lage-owned New York City carwashes, in SoHo and Queens. In addition to higher wages, the workers are demanding better safety training and toxic-free cleaning and polishing products. It’s estimated there are 5,000 carwash workers at about 200 carwashes in the city.

Housekeeping workers at the Los Angeles airport’s Holiday Inn held a one-day strike on Oct. 11 after two workers were fired. The week before, members of UNITE HERE Local 11 had filed a lawsuit claiming they aren’t paid wages required by law, nor are they paid for overtime, and they’re frequently forced to work through lunch breaks. Often they aren’t able to do their jobs properly because the hotel runs out of laundry detergent, dish soap and cleanser, so sheets, towels, cocktail glasses, toilets and sinks are not really clean. As of Oct. 18, Local 11 reported that one worker has been rehired. But more pressure is needed to make management respect the workers by paying them union-contracted wages and giving them the tools with which to do their jobs. Support the workers by signing a petition at tinyurl.com/9f5nwmb.

More than 300 Cablevision technicians and dispatchers in Brooklyn, N.Y., voted to join Communication Workers Local 1109 nearly 10 months ago. Two other groups of Cablevision workers there subsequently voted to join the local. But Cablevision is refusing to bargain seriously; it’s not offering living wages or addressing vital safety issues. That’s not surprising — Cablevision’s CEO is none other than James Dolan, the owner of such high-profile profit-makers as the Knicks, the Rangers, Madison Square Garden, the Beacon Theatre, Radio City Music Hall and the Rockettes. Talk about the .1% of the 1%! Dolan has sent a clear anti-union message by handing out huge raises to all nonunion Cablevision workers in the tri-state area, except to those in Brooklyn. It’s time Dolan got the message: All Cablevision workers deserve a living wage, safe working conditions and a voice on the job. Tell him that by signing the petition at tinyurg.com/9ajvt5e.

Picketing for justice at Golden Farm market in Brooklyn

Golden Farm’s name is probably a sick joke to the mostly immigrant workers at the Brooklyn market. Owner Sonny Kim has refused to honor a court ruling ordering him to pay the workers back wages — shorted from minimum-wage paychecks — and let them hold a government-mandated union election. Labor activists, representing a number of pro-worker groups, have been picketing Kim for months, vowing to fight until the workers have been paid and a contract signed. On Oct. 21, protesters of many nationalities, playing instruments and singing “We Shall Overcome” and “Solidarity Forever,” led a colorful march behind a banner in the Brooklyn neighborhood. In English and Spanish they chanted slogans such as “No contract, no peace!” and “Exploitation, no way! Pay the workers decent pay!”