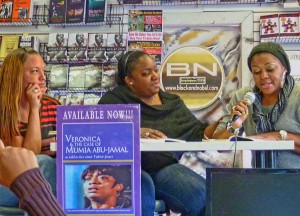 Philadelphia — Over the years, since the 1982 frame-up conviction of political prisoner Mumia Abu-Jamal, witnesses have come forward one by one to reveal that the testimony they gave during the trial supporting the prosecution’s case was coerced.

One of the most poignant accounts of prosecutorial coercion came from Veronica Jones. Her courageous story is the basis of the book, “Veronica & the Case of Mumia Abu-Jamal as Told to Her Sister Valerie Jones,” which was released posthumously this year. Veronica Jones died on Dec. 1, 2009.

A book launch and signing was held Oct. 20 at Black and Nobel Bookstore in North Philadelphia. Valerie Jones introduced the book, and Veronica Jones’ three adult daughters gave readings from the book. Other family members were on hand for support.

Veronica Jones was slated to be a defense witness in Abu-Jamal’s 1982 trial. She had told police she saw two men running from the scene where police officer Daniel Faulkner was shot on Dec. 9, 1981. But at the trial she denied this, saying, “I didn’t see anything.”

At Abu-Jamal’s 1996 Pennsylvania state court hearing challenging his conviction, Jones finally told the truth. She admitted she had lied at the 1982 trial because police threatened her with five to 15 years in prison unless she said Abu-Jamal shot Faulkner.

The state’s response to Jones’ courageous admission was to arrest her on the witness stand in the middle of the hearing. Since that time and until her death at age 48, Jones remained a stalwart supporter and activist on Abu-Jamal’s behalf.

Several speakers at the book launch described the torture and abuse that the mother of the three young girls was subjected to at the hands of police in 1982 when they forced her to change her testimony to help convict Abu-Jamal. A taped reading from Mumia of his forward to the book was played at the event.

Attorney Rachel Wolkenstein, co-counsel for Abu-Jamal in his 1996 Post Conviction Relief Act hearing, who is currently handling his appeal of a life-in-prison-without-parole sentence, explained the significance of Jones’ memoir in “exposing the racist, corrupt and class-driven workings of the criminal justice system.” The book can be purchased through [email protected]