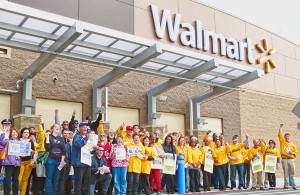 Close to 50 Food and Commercial Workers union members, Occupy Philly and other labor activists assembled at the front doors of Walmart, off Aramingo Avenue in Philadelphia, on Oct. 10. They handed out fliers in support of “OUR Walmart,” the worker-led organization of the giant retailers’ “associates.” Most shoppers were enthusiastic in taking fliers, some saying it’s about time the workers there were unionized, with some even signing petitions.

After leafleting for 45 minutes, a group of a dozen activists entered the store to give the manager a letter addressed to Walmart’s chairman of the Board of Directors, Rob Walton. Signed by some of the community activists who had been leafleting outside, the letter asked the most profitable chain store in the world to cease “trying to silence and intimidate those who speak out through unfair disciplinary actions, cutbacks in hours and even firings.” The manager took the letter, promising to give it to his superiors.