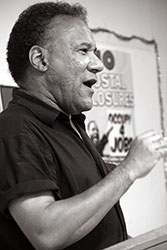 The following excerpts are part of opening remarks given at a Workers World Party forum entitled “The 2012 Capitalist Elections: A Marxist View” in New York City on Oct. 5, two days after the first presidential debate by President Barack Obama and Republican nominee Mitt Romney on domestic issues. Fred Goldstein, author of “Low-Wage Capitalism” and “Capitalism at a Dead End,” also spoke. Holmes, WWP’s First Secretary, and Goldstein are members of the WWP Secretariat. To view both presentations go to www.youtube.com/WWPvideo.

I watched the debate. I had no expectations that there would be anything said that would be helpful to anyone in the working class.

These are two tried and tested representatives of imperialism — Obama in government and Romney as a capitalist.

Why did Obama let this walking caricature of the bourgeoisie, this let-them-eat-cake, this aristocrat of the 1%, babble on about liking the middle class, fighting for jobs and a voice of the unemployed?

Why didn’t Obama attack him? Why didn’t he talk about the Republican program? They plan to privatize Social Security, Medicaid, Medicare and public education and almost everything else that working people have fought for and won over almost a century.

Obama can’t attack Romney too much because some of the things that Romney would do Obama is going to do. He’d put himself in trouble.

One of the most significant things about the text of what Romney said to the room full of millionaires and billionaires in Florida [last May] where he made his 47 percent remark — there was a lot of racist, imperialist stuff in that text. It was informative how the Democratic Party didn’t jump on it. Romney said about the 47 percent, “Those people feel entitled to housing, to health care and to food.” Of all things, imagine that — food! The next thing is oxygen — and water.

It made me think about something that most people don’t know anything about, because right after he said it, it was forgotten. It was what was said by [Franklin Delano] Roosevelt who saved capitalism by making concessions and entering into an imperialist war which put U.S. imperialism on top.

It would have been a tremendous aid to “arouse the base,” to put Romney’s voice saying “they think they are entitled” to this and that next to what Roosevelt thought, for his own reasons, that the masses have a right to.

But they are not going to do that. Obama and most of the Democrats at his level in the party have been pushed into a right-wing program, too.

I think that a lot of people, even many progressives in the labor movement and elsewhere, hoped that Obama four years ago would be like an FDR.

We know what FDR did. He was clever. He had to spend some time convincing the imperialist U.S. ruling class that if they did not make some concessions, they might not be around because there was a Russian Revolution, and revolutionary struggles were going on — it was happening outside the White House — so it is in your interest to make some concessions. So grin and bear it.

What Obama has that helps him — although it is a double-edged sword — is that he is the first African-American president. In a manner of speaking that gives him an edge in terms of deceiving or disarming, for a while, some segments of the working class.

Most of the Black masses are going to give him a pass by virtue of the fact that he is the first Black president — and we understand that. And a lot of other progressive people are going to feel and act the same way. I am not sure whether it is necessarily because they are so excited about the Democrats, or they see some big difference between the Democrats and Republicans. That may very well be the case when you have a lot of oppressed groups, women and lesbian, gay, bisexual, transgender, queer people on a nominal basis. On paper the position of the Democratic Party is different [from the position of the Republican Party].

I still think that there are a lot of young whites who may not understand racism and national oppression but see the fact that we finally have a Black president as progress. It means that it is a country, a society that they are comfortable being part of as opposed to something else that seems representative of racism, reaction and war. I think that is out there. What role it plays is arguable.

It doesn’t matter who wins.

I have talked to some young people from all over the country, including when we were in Charlotte building for the March on Wall Street South. We had a class on the elections. More than one said, “Maybe it would be better if Romney won. At least if he wins, it will wake everybody up. They won’t think that someone is going to protect them, take them out of their trance.” That would get rid of the problem that the first African-American president represents in terms of just throwing a curve at the masses. We certainly will see.

It is not a done deal as much as it does appear, notwithstanding the bourgeois media’s interpretation of the debates. I still think that either of them could win.

No matter who wins, we are going to have to be prepared to fight both with equal vigor and militancy. Yes, we have to fight a government led by the first African-American president differently because he has support among the oppressed, especially the African-American community.

So we have to talk a different way. We can’t be carrying around caricatures [of Obama] and burning them and being personal. It is much easier to fight a Romney or a Bush or a Bloomberg. You can pull out all stops.

Our tact and thoughtfulness in this respect should not be interpreted as support for Obama or support for the Democratic Party in some roundabout way.

We are against them. The Democratic Party is a heavy chain around the neck of the working class and oppressed, and it needs to be broken. And the longer that it is not broken, especially now, the more trouble our class is going to be in.

Both parties and both candidates of the bourgeois parties are engaged in a conspiracy of silence.

They are both being careful about raising austerity. They are waiting until after the elections because, whatever party prevails, almost the moment the elections are resolved the bourgeois media and the whole bourgeois establishment are prepared to generate a crisis, a panic atmosphere.

The most important thing — not that we should wait a month until the election is over — is for the working class and the oppressed, Occupy Wall Street and all the militants to be prepared to open up a tremendous classwide struggle against the capitalist crisis.

A year ago today, Oct. 5, 2011, was the first day that the local labor movement actually organized a big labor march in solidarity with OWS. Remember at Foley Square, you could hardly move. It was so tremendous because what had happened is OWS, with its militancy, woke up organized labor, not just in New York City, but around the country.

Flash ahead 11 months and you see this tremendous brave and relatively victorious teachers strike in Chicago where they did the work and won solidarity with the parents and the students.

They took on the Democratic Party machine right on Obama’s turf. At the AFL-CIO international level or state level or central labor council level, when considering what to do and what not to do to manifest solidarity with this brave strike, the question that came up was the elections. [The response was] we don’t want to mess up the elections, our hands are tied, so send a speaker, send some money, have a press conference or maybe do nothing because the elections take priority.

That is why we prepare for opening up an unprecedented classwide struggle against the capitalist crisis with our allies and friends through the project of People’s Power Assemblies.

One of the biggest goals of the Assemblies is going to be to help break the chains that the Democratic Party has on the organized labor movement and the working class in this country, so they can fight in their own interests the way they need to.