Bulletin: As this story went to print, the 21-day strike came to an end. The striking workers at Walmart’s Elwood warehouse won their main demand: the company agreed to stop illegal retaliation against workers protesting bad conditions. The workers will return to work with full pay for all days they were on strike. 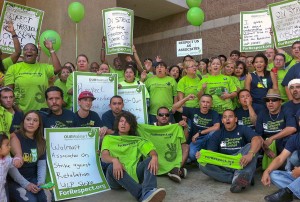 Elwood, Ill. — Striking warehouse workers, along with 600 union members, clergy and community supporters, marched on Oct. 1 at Walmart’s largest distribution center in North America located in Elwood, Ill. Seventeen people, including United Electrical Workers Director of Organizing Bob Kingsley and UE Western Region President Carl Rosen, were arrested in a civil disobedience action that blocked the road to the main truck entrance. The action scared the bosses so much that production at this central hub for Walmart distribution was completely shut down for the day.

The Elwood warehouse workers went out on an unfair labor practice strike on Sept. 15. Most workers in the warehouses are temporary employees with no labor protections or stable jobs. Walmart has been passing all the responsibility for terrible working conditions onto contractors that run their warehouses.

On Sept. 13, Warehouse Workers for Justice assisted workers in filing a sixth lawsuit against warehouses operated by various multinational corporations in the Wills County suburbs of Chicago, this time targeting Walmart. When workers took action the following day to deliver their demands to management, they were fired. This illegal retaliation triggered the strike.

“These young folks can’t get a job anywhere these days. Then they come out here and get these temporary jobs that give nothing but disrespect, stolen wages. They don’t even get health insurance,” stated Pastor Craig Purchase of Mt. Zion Full Gospel Tabernacle Church in Joliet, Ill. “[The bosses] are shredding up our next generation. I call it the meat grinder.” (UE News, Oct. 3) Purchase, who is also president of the local Rainbow PUSH Coalition, was one of the 17 people arrested.

A WWJ press release states: “The rally brought Walmart’s distribution system into the public eye to protest unfair labor practices and other abuses in the nation’s largest inland port. Now supporters all over the country want Walmart to know they support improved working conditions in the company’s warehouses.” The release continued, “Workers responsible for moving an estimated $1 trillion worth of goods a year through the global economy are paid low wages, often denied breaks and basic protective gear, and are employed primarily through temp agencies.”

Strikers and supporters also delivered more than 100,000 petition signatures supporting their concerns to the management of the Chicago West Loop Walmart Express on Oct. 5.

In striking, the Elwood workers joined their striking sisters and brothers in the Los Angeles area, who conducted a two-week strike beginning Sept. 12. Those workers held a 50-mile protest march demanding that Walmart take resonsibility for their stolen wages, health and safety violations, discrimination and sexual assault.

“Warehouse workers in California won their strike. They got some health and safety situations cleared up and got Walmart to agree to participate in inspections and take responsibility for the working conditions,” reports striking warehouse worker Mike Compton in the same UE News article. “I have been there three months, and I am considered a veteran — the turnover rate is unbelievable.”

“Warehouse Workers for Justice has recovered over $1 million in stolen wages, but lawsuits are only bandages. Now it is time to organize!” stated Cindy Marble, former warehouse worker and WWJ organizer during the Oct. 1 rally. “It’s personal to me. I lived it; my son worked there; I have family members that worked in warehouses. I am pissed. We are making lots of money for this company, and they are treating people like slaves.

“Walmart sets the bar for warehouses around here, they can’t keep blaming it on the contractors. Walmart needs to take responsibility for what is going on in their house,” Marble concluded.

Meanwhile, logistics workers — from the ports to the warehouses, transportation networks and railroads — are now organizing across the country. Retail workers inside Walmart stores are forming organizations, and warehouse workers in New Jersey are beginning to organize.

Curtis Tucker, 22-year-old striker, was formerly a floor worker but got transferred to the receiving department after signing the union petition. After having worked three days in the warehouse, he went to get his paycheck only to be told that they did not know who he was and there was no paycheck for him. Tucker told Workers World, “I am on strike to make this a better job for my family. I have three kids and a wife, and I just need a reasonable salary.”

Tucker also spoke about the dangerous working conditions, especially when workers are forced to perform duties without adequate staff and equipment. He stated, “They give us boxes that say ‘team lift,’ but then only allow one worker to pick it up. We get assigned to an entire truck to unpack all by ourselves.”

Earlier this year on International Women’s Day, March 8, women leaders in WWJ organized a major public hearing to draw attention to the rampant sexual assault and discrimination against women. According to a WWJ report, 90 percent of women face sexual harassment in the workplaces at Will County warehouses.

“Working in these warehouses we are lucky to get $200 per week. … You can’t afford food, can’t afford a babysitter, can’t afford anything we need to live,” Uylonda Dickerson told Workers World. “I have been sexually assaulted. Who comes to work to have our body looked at? We don’t come here to be touched.” When workers complain about this harassment, it is often ignored by the mostly male supervisors. Dickerson reports they would dismiss her and say, “You are just being a female.”

WWJ filed a lawsuit against this treatment. To support this important aspect of the campaign, you can make a contribution to the Warehouse Women’s Legal Defense Fund.

For updates on the WWJ organizing campaign, check out warehouseworker.org.