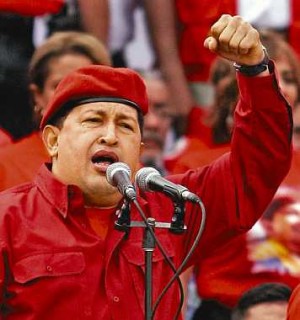 No other elections in Venezuela have aroused such excitement and commitment in Venezuela and worldwide. A record high of more than 80 percent of those eligible voted, compared to 75 percent in 2006 and 70 percent in 2004. (vtv.gob.ve) Progressive forces around the world sent statements or have organized demonstrations in solidarity with Chávez’ Bolivarian Revolution.

In Caracas, the capital, people began celebrating early on election day, confident that Chávez would prevail. After the CNE announcement, thousands converged at the Miraflores Presidential Palace for a big, cheerful, mass celebration to hear Chávez’ victory speech. At nearly midnight, Chávez appeared on the balcony and sang the national anthem, “Gloria al Bravo Pueblo” (“Glory to the Brave People”), together with the crowd.

The president congratulated those who voted for and even against him for “not having fallen into destabilizing plans.” This referred to reports weeks earlier that the opposition planned to mobilize, claiming election fraud. Foreign nongovernmental organizations, particularly those from the U.S. like the U.S. Agency for International Development, Freedom House, etc., would back these phony claims.

Everyone knows Chávez, not so Capriles. During the April 2002 coup against Chávez, Capriles was mayor of the Miranda municipality and led an attack against the Cuban Embassy in Caracas. This counterrevolutionary activity led to his spending 119 days in prison.

In 2008, he became governor of the Miranda state. The following year he was accused of corruption and fraud. On February 2012, he became the sole opposition candidate. He has strong ties with the business sector. All of world imperialism, especially Washington, supported him.

Thus the election squared off not just two individuals, Chávez Frías versus Capriles Radonski, but independence and sovereignty versus imperialism, the Bolivarian Revolution versus neocolonialist counterrevolution.

For the people in Latin America and the Caribbean, what was at stake was the future of integration of the region which the Bolivarian Revolution has propelled. It was the future of regional organizations — ALBA, CELAC, UNASUR, the bank of the South — and the cooperation among the countries and people to lift the masses out of poverty. At stake was the road to real liberation from imperialism and for the socialist construction of their society that millions in the region are pursuing.

During an interview with Telesur after he voted, Chávez said, “It is not about me; it does not depend on a man. What is at stake is independence, the answer to the Free Trade Agreements, to neoliberalism. That is what is at stake. In 13 years, there have been 14 elections and we only lost the referendum [for a reform of the Constitution]. [In Venezuela] the people have been empowered; it now belongs to her owner, the people.”

Capriles’ discourse during the elections was demagogically tailored to appeal to the masses of poor, with the message that he would improve the programs already established by Chávez. The truth is that he would destroy them, or try to.

Millions of Venezuelans understood this and voted for Chávez to defend the Misiones — the many programs that have benefited health, education and housing for the majority of the people — funded with oil industry income. They voted to defend a revolution that has increased the support of arts and culture; extended the rights of women, children and the elderly; and increased the participation of the most excluded from society: the Native and Afro-Venezuelan people.They voted for Chávez to defend participatory democracy versus bourgeois “representative” democracy practiced in the United States. They thus defended a revolution that in a short time had eradicated illiteracy, reduced poverty, built infrastructure, started nationalizations and increased food production.

What’s still at stake in Venezuela

Yet, a crucial accomplishment is at stake, too. The revolution began with very progressive reforms. Its most outstanding gain was a new Constitution that the people themselves crafted.

Now that revolution has developed with the goal of building society on the basis of socialism. This is an answer to historian Francis Fukuyama’s 1990s proclamation that the dismantling of the Soviet Union and Eastern Europe meant “the end of history,” echoed by Washington’s consensus. Now small Venezuela dares to declare socialism as the revolution’s goal, setting a “chain reaction” throughout Latin America and the Caribbean. Now Cuba is not alone.

However, without dismantling and repressing the old violent capitalist state and replacing it with a new armed power that can give a new start to socialist development and protect it, the road to final liberation from capitalist and imperialist oppression is precarious.

Much political education with the masses must be done in order to establish and support the changes needed. That is the stage of the Bolivarian Revolution now. That is why the most advanced elements within the revolution have worked hard on this election in order to preserve the conquests and to push for deepening the revolution in a socialist direction.

They defended nationalizations and all the necessary operations to transfer power to the people, to the working class, away from the country’s bourgeoisie and the corporate transnational financial interests.

All the pro-revolutionary “Chavista” forces and parties united in a Patriotic Pole, along with 35,000 other social and civil organizations, to organize and mobilize the vote for Chávez. This included the main left parties, the young Venezuelan Socialist Unified Party (PSUV) — which is Chávez’ own party — and the Communist Party of Venezuela (PCV), the latter with 70-plus years of struggle history. These and 10 other parties campaigned for Chávez, each with its own voting line.

The PCV campaigned in many regions and obtained nearly half a million votes for Chávez on its line. PCV leaders said this vote “clearly shows that the Venezuelan people in general are ready to continue the struggle against imperialism and at the same time shows a disposition to advance toward socialism.” The PCV adds, “It is necessary to promote the class struggle to defeat impostors who recompose capital in the name of socialism.” (pcv-venezuela.org)

Juan Contreras, deputy delegate to the National Assembly and leader of the Simon Bolivar Coordinating Group in the most militant neighborhood of Caracas, called the 23 de Enero, said: “Even having victory secured, … we must work hard to secure that triumph and then continue to sustain it. Here we are trying to build socialism, and there is no formula for reaching that state. We are in its search and that is this stage of transformation demonized by the major media, by imperialism and the oligarchy.” (anncol.eu)

All that is why the struggle underneath the elections was so fierce — because what the opposition candidate represented was a turning back to neoliberalism, a victory for capital and U.S. imperialism, a return to a colonial state.