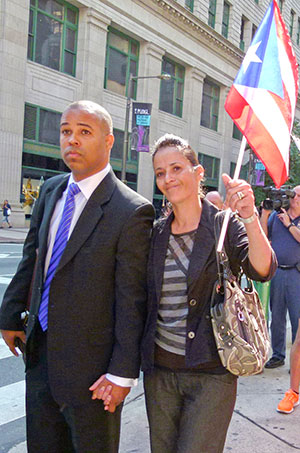 With her attorney Enrique Latoison at her side, after meeting with Mayor Nutter
in City Hall, Aida Guzmán accepts Puerto Rican flag from rally participant.

With only two days of organizing, close to 100 people rallied in front of the Philadelphia City Hall on Oct. 5 to protest police brutality against the Puerto Rican community.

The attack occurred on Sept. 30, during a celebration in the community at the end of the Puerto Rican Day Parade. The parade itself was held on the Benjamin Franklin Parkway, in an area near the Philadelphia Museum of Art, far from North Philadelphia’s Puerto Rican community, but close to a community where gentrification displaced hundreds of Puerto Rican families in the early 1980s.

In a video that went viral, taken by Gisela Valentín, a cop is shown hitting Aida Guzmán in the face and in the back of her head, so hard that she fell to the ground. Several other police were surrounding the area while she was being hit, preventing anyone from getting through and allowing the attack to continue. Adding insult to injury, Guzmán, bleeding from the injury, was then handcuffed and arrested on charges of disorderly conduct. The case against her was eventually dropped.

This act of police brutality against a woman has outraged many in the city and particularly Puerto Rican women, who complained about the silence from city public figures and elected officials. Only one, Puerto Rican Councilperson María Quiñones, complained about the attack and demanded an investigation. It took several days and several views of the video (http://tinyurl.com/8eybtou), which showed that Guzmán did nothing to provoke the attack, for the police commissioner and Philadelphia Mayor Michael Nutter to issue a statement. Had it not been for the video, the attack would have been ignored completely. It wasn’t until Oct.5 that Nutter offered an apology to Guzmán.

But, as the Oct. 5 protesters stated, an apology will not suffice. Philadelphia has been marred by police brutality ever since the infamous Frank Rizzo headed the city’s police department. This is the city where Black Panther members were ordered by police, under Rizzo’s leadership, to strip naked in front of TV cameras in 1970; where Mumia Abu-Jamal was sentenced through an illegitimate “justice” process full of lies and judicial misconduct. It is the city that bombed itself in 1985, dropping an explosive device on the home of MOVE members, an action that killed six adults and five children. Only one adult, Ramona Africa, survived. Although herself a victim of the fire, she spent several years in prison.

Philadelphia police and the “justice” system have created a climate where a cop can commit violence with impunity. The cop that attacked Guzmán did so because others were protecting him, and he knew he could get away with it. The police are forces of the state that work on behalf of the rich, protecting their interests — not the interests of the people, and particularly not the interests of people of color or even of poor whites.

The officer has been dismissed for a month, and the police department claims it intends to fire him afterwards. He has not been charged with any crime, and already the infamous Fraternal Order of Police is trying to overturn his dismissal from the force.

The “We are all Aida” protest was initiated by Puerto Rican women demanding respect for the women and the community as a whole, and that charges be brought against the individual cop and against all the other ones standing by. The outrage demonstrated by those attending the rally was evidenced by remarks like, “How am I going to teach my sons and grandsons that they should not hit a woman, when they see a police officer hitting a woman for no reason?” and “If they do not charge the officer, there will be riots.”

The protest was attended by people from the Puerto Rican community along with other progressive people in the city, including other Latinas, African Americans and whites. At one point, Aida Guzmán herself passed by, accompanied by her attorney. The protesters chanted, “We are all Aida!” to show their support.

Margarita Padín, one of the organizers, put the assault into context when she said that “this incident includes a combination of police abuse, abuse against women, and imperialist abuse against second-class citizens of a colony, plus the disgrace of a capitalist system that turns people into commodities of the system, to the point that we see ourselves as commodities. For that reason we see the abuse against another human being as if it is not against us and it does not concern us, and we can then put a monetary value of individual gain on the incident, instead of uniting in solidarity against the abuse.”