Hardening arteries of a dying system

Money is the lifeblood of capitalism.More and more, the bankers have it locked away in their vaults and don’t know what to do with it. They already face that most irrational feature of capitalism, “overproduction,” which to them means that corporations aren’t expanding because there’s not much of a market for more goods and services, so therefore companies aren’t borrowing money and the bankers are stuck with cash that’s just sitting there, not drawing interest.

Meanwhile, the workers, who have produced everything of value, increasingly find it impossible to scrape up enough cash to live.

Right now, the European banks, principally those backed by German capital, are trying to overcome the crisis that all capitalists are in by lending out money to “debtor” countries in the European Union — especially Spain, Portugal and Greece — at the highest interest rate they can get.

To make sure these governments can pay that interest, the bankers have been demanding draconian cuts in every needed social service won over generations of struggle — pensions, unemployment insur­ance, health care, education, you name it.

These steps are driving the working class, and many in the middle class, into a frenzy of strikes and protests. The bankers don’t even listen to the bourgeois voices warning their class to ease up a bit in their own self-interest.

As long as there is capitalism, capital will flow to where the profit returns are the largest, creating an entire world divided between haves and have-nots. However, after decades of the scientific-technological revolution, the very thing that drives capitalism into crisis — high productivity — provides the basis for quickly rectifying these divisions by reallocating the surplus product to where it is needed the most.

In other words, when the working class breaks the grip of the capitalists over society and sets up a socialist system, bankers in richer countries like Germany won’t be milking the poorer European countries, as they do now.

Besides the massive workers’ struggles detailed below, some 80,000 people assembled Sept. 30 in downtown Paris to protest government cutbacks and tax increases; and across Germany on Sept. 29 some 40,000 people protested social cuts and growing social inequality.

A primarily youth-led action called under the slogan “25S: Encircle Parliament,” did exactly that on Sept. 25 and 26. Despite heavy violence-baiting from the regime of Prime Minister Mariano Rajoy and the corporate media, some 25,000 people gathered in Neptune Square to try to stop the center of government from functioning as usual.

The center-right-wing Popular Party has led Spain’s government since November 2011, sharply cutting social spending and laying off thousands of public workers. The social-democratic opposition party, the PSOE, has been complicit in these cuts.

Currently, the Spanish government is seeking an additional bailout from the European Union as it again faces bankruptcy. A new bailout plan will likely demand even more drastic spending cuts. Already, 25 percent of workers in Spain are unemployed, with the situation growing worse daily.

Many working-class families in Spain are being evicted from their homes. Courts processed 58,000 foreclosures in 2011, while 2 million properties stand vacant.

Youth started taking over public spaces in May 2011 and have halted home foreclosures. A lengthy miners’ strike in the Asturias region in response to cuts in mining subsidies led to police attacks that workers stood up to with homemade projectiles. Long marches of thousands of miners moved from Asturias to a triumphal entry into Madrid.

The Indignados — those who began the occupations of the town squares — as well as the more radical sectors of the anarchist and communist movements, and grass-roots unionists led the event. Unleashed by the government, the cops attacked with batons and pepper spray. Cops arrested 35 people and injured 60. Some of the injured suffered wounds from plastic bullets.

Videos made available all over the Internet show youths with their faces covered, bearing large red flags. They are seen confronting lines of police in riot gear. As police violently drag youths away, the shouting crowds come to their rescue, pulling them away from the police.

One extremely popular video first shows a cop brutalizing people. Then, one youth leaps into the air to “drop kick” that same cop, who then falls to the ground where he is accessible to mass anger.

Arguing that the current center-right government is losing control of the country, the social-democratic PSOE promises to implement austerity in a way that would soften unrest. What the movement in the streets is demanding, however, is an end to austerity itself, not a more “responsible” version.

Spain’s labor unions are discussing a general strike in the near future. One held in the Basque Country on Sept. 26 was a big success.

In Spain and elsewhere, these confrontations between the capitalist state and the working-class movements are growing. The rage that millions of people feel toward harsh economic circumstances is translating into more serious actions that challenge the capitalist state.

Greek Prime Minister Antonis Samaras and the Greek and European ruling classes are facing a major dilemma: They have promised the European Union and the International Monetary Fund nearly $15.5 billion in spending cuts over the next two years. The bulk of these funds is expected to come from cutting wages, pensions and welfare benefits, heaping a new wave of misery on the Greek working class.

Greece is currently in the midst of a deep capitalist economic recession aggravated by previous austerity measures.

At question is how the Greek people will react.

On Sept. 26, tens of thousands of workers participated in militant demonstrations in 70 cities across the country. Millions responded to a call for a 24-hour general strike by PAME, the All Workers Militant Front, the union confederation close to the Communist Party of Greece (KKE).

Riot police used tear gas and pepper spray against demonstrators near the country’s parliament. Protesters set fire to trees in the National Gardens and used hammers to smash paving stones and marble panels to use as missiles against the riot police.

Over 50,000 people joined the march in central Athens. Ships stayed in port, museums and monuments were shut down and air traffic controllers walked off the job. The strike closed the Acropolis, Greece’s most famous tourist site, and halted flights for hours. Train, airline and ferry services were suspended, schools, shops and gas stations were closed, and hospitals were functioning with emergency staff only.

“How can you survive on $775 a month, with ever-rising taxes, and continue to pay bills and buy necessary supplies?” he asked. (AP, Sept. 26)

Led by PAME, Greek workers have held more than a dozen general strikes in the past four years. The European and Greek ruling classes have tried to ride over this resistance, but it is now spreading to other European countries. 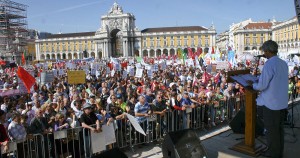 Thirty-eight years ago, organized and militant Portuguese workers acted immediately with strikes and demonstrations to back up a revolt within the military, weary of a long colonial war, to overthrow the long-entrenched, U.S.-backed, fascist regime that had ruled Portugal since 1932.

Now, a new generation of workers and youth face the hated “troika” of the European Union, the European Central Bank and the International Monetary Fund, which is demanding greater and greater measures of “austerity” from the present right-wing Portuguese government.

On Sept. 29, some 200,000 people marched through the streets of Lisbon, the capital city, and crowded Commerce Square, near the waterfront, with a massive rally. Protesters carried banners carrying the messages: “The struggle continues!” and “Go to hell, Troika! We want our lives back!”

The demonstration was organized by the CGTP-IN, Portugal largest union with 750,000 members (Portugal’s population is 11 million). It came two weeks after other huge nationwide demonstrations against austerity measures that involved over 1 million people and were led by militant youth organizations. The Sept. 29 action was held simultaneously with large demonstrations in Greece, Spain and other European capitals.

Portugal’s workers are enduring record unemployment of over 15 percent. At the behest of imperialism’s banking “troika,” the Portuguese government, led by Prime Minister Pedro Passos Coelho, has slashed social benefits and hiked taxes for the workers. The Portuguese economy is mired in a deep recession, with the “contraction” of the gross domestic product expected to total 3 percent for 2012, and a deeper slide is expected in 2013.

To curry favor with and obtain “rescue” funds of $100 billion from the same international bankers who caused Europe’s financial crisis in the first place, and who now want the workers to pay for it, Portugal’s right-wing government has imposed one cutback after another on Portugal’s workers, who are already among the poorest paid in Europe.

The government recently announced plans to raise the workers’ contribution to the country’s social security system by 64 percent while cutting back the business contribution. After the Sept. 15 mass protests, Passos Coelho pulled back — in words. But the mid-October annual budget may call for even harsher cutbacks to satisfy the banks.

More than just a one-day show of force by the country’s trade unions, the CGTP-IN announced that the Sept. 29 demonstration was a prelude to future struggle. On Oct. 3, meetings will be held to prepare a general strike.