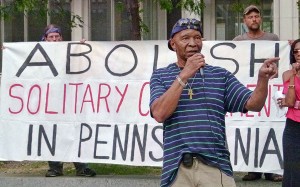 Philadelphia — In August 2011, Juan Mendez, the United Nations Special Rapporteur on Torture, stated that solitary confinement “may cause serious psychological and physiological adverse effects on individuals” and “violate the international prohibition against torture and cruel, inhuman or degrading treatment.” He called for the absolute prohibition of solitary confinement in excess of 15 days.

The HRC notes that with the increase in the number of U.S. prisons and prisoners over the last 30 years, “the use of solitary confinement has exploded, with little oversight by legal, legislative, or law enforcement agencies.” When complaints are filed, the DOC ends up “investigating itself.”

Shandre Delaney, whose son Carrington Keyes spent 10 years in solitary confinement at SCI Pittsburgh in retaliation for his political beliefs, charged, “The DOC not only tolerates abuse, it is standard operating procedure.”

Delaney added, “The Pennsylvania DOC was the training ground for Abu Ghraib.” Charles Graner Jr., the former U.S. Army reservist convicted in connection with the 2003-2004 torture and sexual, physical and psychological abuse of Iraqi prisoners of war, had served as a guard at SCI Greene.

Delaney raised that 92 criminal accounts of sexual abuse of prisoners were filed against one officer at SCI Pittsburgh, but nothing was done. Former prisoner Dana Lomax Williams noted that many women hesitate to speak out about sexual harassment for fear of retaliation.

Shoats stated, “Our fight is not just for the 2 million people in prison, but against a prison system that affects people on the outside as well. Forty public schools are going to close in Philadelphia, while Graterford Prison is set to expand. We need to step in front of those bulldozers to save a child’s life.”

Speakers at the rally and hearing stated that political activism and racism were often factors behind prolonged solitary detentions. Mumia Abu-Jamal, Pennsylvania’s best known political prisoner, spent nearly 30 years in solitary confinement on death row before his January 2012 release to general population, where he continues to challenge his 1982 conviction.

Former prisoner Hakeem Shaheed charged that he was placed at the infamous supermax prison in Marion, Ohio, in retaliation for speaking out against torture and abuse within federal prisons and because of his Muslim beliefs.

A highlight of the rally was an address by Robert King, the only freed member of the Angola 3, who spent 29 years in solitary confinement in Louisiana. Albert Woodfox and Herman Wallace, who along with King organized a prison chapter of the Black Panther Party in 1971, have spent over 40 years in solitary confinement after the death of a prison guard. An ongoing lawsuit and international movement are demanding their release.

King compared the struggle to abolish solitary confinement to the abolitionist movement of the 1800s, noting that anti-slavery activists took a moral stand against a system that was protected by laws. “Like slavery, prisons are meant to dehumanize. Prisons are making big money, not just for the Correction Corporation of America, but for the U.S. government, the biggest profiteer.”

At the hearing, psychologists Dr. Terry Kupers and Dr. Craig Haney emphasized how solitary confinement exacerbates mental illness. Kupers described the expansion of prisons and supermax facilities in the 1980s. Funding was cut for rehabilitative services while prisons began to see a rise in recidivism.

According to a 2003 study by the Urban Institute, Justice Policy Center, while 95 percent of prisoners will be released back into their communities at some point, within three years nearly 7 out of 10 males will be rearrested and half will be back in prison.

Robert Meek, of the Disability Rights Network, explained that 800 prisoners registered as having mental health issues are currently held in solitary confinement in Pennsylvania prisons, while beds at the state’s mental health facility sit empty.

Jules Lobel, of the Center for Constitutional Rights, who testified via telecast, challenged the state’s contention that solitary confinement punishes the “worst of the worst.” Lobel represents prisoners at Pelican Bay State Prison in California who have engaged in hunger strikes to bring attention to their conditions.

In Pennsylvania, the DOC maintains a “Restricted Release List” of prisoners placed in solitary confinement for indefinite periods of time. Those on the list can only be released with the approval of the DOC secretary, even when they have not committed any offense in years and have received no notice of their designation.

Wrongly accused of the murder of a prison guard and held for years in solitary confinement in a California prison until his conviction was overturned, Shujaa Graham passionately told the state representatives conducting the hearing, “Do the right thing. Stop torturing people!”