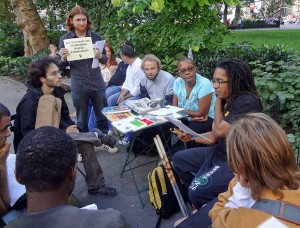 Growing interest in Marxist-Leninist ideology and the struggle for socialism was shown by young activists. Workers World Party was one of two Marxist groups to contribute to the university by organizing four classes, along with distributing and selling WW newspaper.

Caleb Maupin and Sue Davis held a class on “Socialism, Class Struggle, and Revolution.” The class included a lively discussion of Marxism, feminism, organized labor and the history of WWP.

Larry Hales and Monica Moorehead organized a class entitled “What Is the State? Who Does It Serve?” This class was very well attended, with much debate and discussion on the evolution of various forms and epochs of class rule and oppression.

Sara Flounders led a class on “Why Wall Street Is War Street.” Bill Dores joined with Gary Lapao, a representative of the International League for People’s Struggles, to hold a class entitled “What Is Imperialism?”