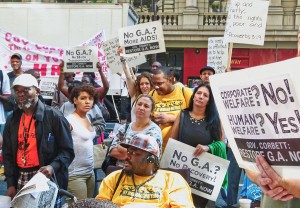 “Gov. [Tom] Corbett, blood is on your hands,” charged Jeffrey Jordan, pastor of the Metropolitan Community Church, on Sept. 13. He was criticizing Pennsylvania’s elimination of general assistance payments to 61,000 unemployed single adults, couples without children and disabled people.

A crowd of more than 100 people, some breathing with the aid of small oxygen tanks and several in wheelchairs, took over the street in front of the governor’s Philadelphia office. The cuts, which were put into effect on Aug. 1, mean many former recipients have no funds to pay for medicine, shelter, clothing and other items needed to live.

Corbett’s office had previously promised to meet with ACT UP, an AIDS and HIV advocacy organization, to discuss what was being done to compensate for the state’s GA cuts. ACT UP organized the Sept. 13 rally to ask, “Where is the meeting you promised us?”

When a governor’s representative addressed the crowd, repeating the administration’s intention to meet with “a few people,” Waheedah Shabazz-El, of the U.S. Positive Women’s Network, took the mic to demand “a meeting with all of us — in the convention center.”