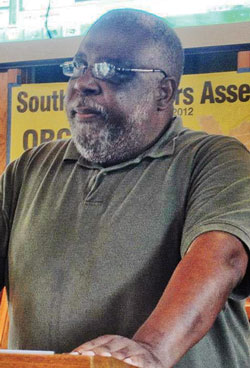 The following opening remarks were made by Saladin Muhammad, coordinator of the Southern International Worker Justice Campaign and retired United Electrical, Radio and Machine Workers of America (UE) international representative, at the Southern Workers Assembly, Sept. 3, in Charlotte, N.C.

Why are we here?  And what is our charge as Southern workers? Are we here mainly as a form of protest against the failed policies of the Democratic Party regarding worker rights? Both parties have failed the working class in this regard and more.

The Southern Workers Assembly is a call to action by rank-and-file workers to unite, organize the South and speak in our own name. Southern workers cannot wait for the Democratic Party and certainly not the Republican Party, to enact some progressive labor laws before we can begin a serious effort to organize ourselves into a labor movement. Unfortunately, this has been a serious error on the part of the U.S. labor movement for too many years.

During the 1950s and 60s, the power of an organized and united labor movement in the South was needed to help fight against the racist system of Jim Crow, which greatly divided and created deep wounds and lasting scars within the working class that capital will always try to exploit.  This is why a social movement is needed to organize labor and the working class in the South. We want the Southern Workers Assembly to be a launching pad that begins a process of building a Southwide social movement to organize labor.

In an economy and society where having a job is a requirement for providing ourselves and families the basic necessities of life, worker rights become human rights. Thus, a social movement to organize labor in the South must become a major part of the human rights movement, and must be organized with the same energy and sacrifice of the civil rights movement that helped to bring about some progressive reforms for Black and working people.

However, a human rights labor movement must also be a transformative movement that seeks to reorganize the economic, social and political relationships that determine the value of labor, the distribution of the wealth created by labor and technology, and that protects the lives of the people and sustainability of the planet. Capitalist globalization and its impacts require that our labor movement have a basic vision of transformation as we organize to build power.

History has also shown that the failure of the U.S. national labor movement to make a concerted and coordinated effort to organize labor in the South has been a major factor allowing the most conservative political base within the U.S. from being effectively challenged by the organized power of Southern workers. This has affected the class consciousness and confidence of Southern workers about our power to challenge corporate power, which clearly dominates and dictates the decisions and policies of the state and local governments throughout the South.

Corporate power has not only superexploited the labor of Southern workers, it is also responsible for the underdevelopment and negative environmental impacts on many working-class communities, especially African American, Latina and Latino, Native American and poor white, because of the billions in incentives and tax breaks that were diverted from community development to give to the corporations to locate in the South.

The massive disaster caused by Hurricane Katrina in parts of New Orleans and the Gulf Coast in 2005 is an example of what happens when corporate wants are prioritized over the infrastructure and human needs of the people.

Now that the South has re-emerged as a major region in the global economy, where U.S. manufacturing, foreign direct investment and finance capital are becoming concentrated — a Wall Street South — the South will be a major force in the shaping of U.S. labor and social policies. Efforts to pass anti-immigration laws are developing rapidly in the South, to create another source of superexploitation that is based on the race and ethnicity of the working class.

The U.S. prison-industrial complex, in addition to jailing mainly the unemployed from the Black and Latina/Latino working-class communities, provides a superexploited labor for major corporations. This is largely why there have been draconian laws such as “3-Strikes You’re Out” and crime bills enacted over the past 20 years by both Democratic and Republican administrations.  The so-called “legal status” and stigma permanently branding the formerly incarcerated, forces many to have to work for little or nothing if they can get hired at all.  This is a major reason forcing many back into crime, and the high rates of recidivism.

Dividing the working class and the oppressed peoples in every way possible is the main strategy of corporate power. The U.S. labor movement must not see the independent, worker-led organizations and initiatives of the oppressed peoples as something that divides the working class.  They exist to take up the struggles against the special forms of oppression and exploitation that impact our lives, and that have not been taken up effectively within and by many of the trade unions.

The struggle to respect the right of these organizations to exist as part of the labor movement while they are also leading the fight for self-determination as oppressed peoples, must be a main aspect of the struggle against racism to be waged within the U.S. labor movement and the working class, if we are to build a powerful and transformative labor movement inside of the U.S.

Of the 100 million people living in the South, the largest region of the U.S., African American and Latina/Latino together make up close to 40 percent of the South.  Fifty-seven percent or more than 20 million Black people, and 40 percent or more than 18 million Latinas and Latinos live in the South. Black and Brown unity is therefore critical to forging and anchoring the unity of a strong Southern labor and working-class movement.

Having pointed out the weaknesses of the U.S. labor movement in failing to organize the South and the role of the South today in the global economy, it is important to make clear that this in no way is meant to suggest that workers in the South have not been organizing and resisting. Your presence at the Southern Workers Assembly is a testament that we are organizing and fighting.

However, our organizing and campaigns have been mainly local and unconnected to a framework that projects a Southwide movement.  This has made it difficult to develop and promote a workers’ fightback climate, and has weakened and discouraged sustained efforts to organize unions in the South.

There will be many challenges in building this movement that we must educate and prepare ourselves for.  The crisis impacting labor over the past 30 years from the restructuring and globalization of the economy and the attacks on unions resulting in a loss of membership by many unions, has led to an unhealthy competition between unions, which have divided the working class by fights over union jurisdictions, raiding and splits in federations and national unions.

A Southern labor movement must build structures that unite workers within the same sectors regardless of the national unions or organizations they are affiliated with to democratically work out an independent plan for concentration and organizing within those sectors.  It is from this base of organizing that we must win the support from national and international unions for organizing labor in the South.

Organizing in the South greatly needs the support of a strong rank-and-file movement within the national unions that works to build support from their local and national unions for the development and sustaining of a Southern Labor Alliance, including actions of national labor solidarity as we saw with the Charleston, South Carolina, dock workers struggle, and the Wisconsin public-sector struggle that closed down the state Capitol. Organizing the South must become a clarion call for the U.S. labor movement to go on the offensive.

We want to leave from this Southern Workers Assembly with some basic framework in place that allows us to move to a next step in holding meetings to begin to map out a plan for forming a Southern Labor Alliance and launching a social movement campaign to organize the South.

Let’s get to work here today in our brief period at the Southern Workers Assembly.  Onward toward a Southern Labor Alliance!