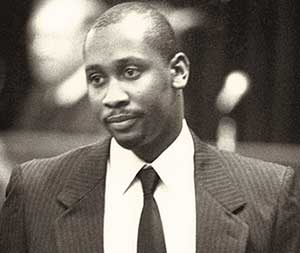 “We need to dismantle this unjust system …” Troy Davis had written shortly before his execution by the state of Georgia on Sept. 21, 2011.

Atlanta — Hundreds of thousands of people around the world had signed petitions asking for clemency. Dozens of well-known political and religious figures had written letters. People held demonstrations in countless cities and towns and chanted, “I Am Troy Davis!”

The horrific crime of capital punishment in the United States was made real to millions in the person of Troy Anthony Davis, who could be executed for a murder with no physical evidence or forensics, no weapon or fingerprints and where most trial witnesses recanted their testimony against him, charging the police with coercion.

Many who joined the struggle to stop his state-sponsored murder were convinced of his innocence by the particular facts of his case. The coldly calculated actions of the “justice” system then revealed a deeper truth to them about the system’s inherent racism and class bias.

Just days before Davis’s execution, on Sept. 17, 2011, Occupy Wall Street began its historic emergence as a burgeoning new movement of the 99%, those devastated by the economic crisis, unemployment, foreclosures, debt, discrimination and lack of opportunity. At one of its earliest marches that took to the streets of New York in defiance of the police, people raised chants and signs for Troy Davis.

A section of Atlanta youth was deeply impacted by Davis’ fight for justice. This last year has seen these youth protest the mass incarceration, police brutality and killings throughout the metro area and support prisoners held in deplorable conditions in Georgia’s prisons and jails.

They have organized protests and rallies in support of prisoners at Jackson Diagnostic and Classification Center — the same prison where Davis was executed. These prisoners conducted a 45-day hunger strike this summer, demanding an end to extended isolation, access to medical care and personal hygiene products, family visits and phone calls, and an end to guard abuse and brutality.

Many of these imprisoned men participated in the historic Georgia prisoners’ work stoppage in December 2010. Since then they have been held in solitary confinement, suffered physical abuse at the hands of guards and ongoing retribution for their alleged leadership of the strike action.

To carry out this work, several organizations and individuals have formed Georgians for Prison Abolition. They have called for a National Day of Action against Mass Incarceration on Friday, Sept. 21, to never forget Troy Davis and to meet his last request.

In Atlanta, people will assemble at 9 p.m. at the Dr. Martin Luther King Jr. grave site and march to the park on Peachtree Street at Auburn. The site of the Occupy Atlanta encampment, this park’s name was changed from Woodruff to Troy Davis Park by hundreds of youth, homeless people, and peace and justice activists who occupied the downtown space for weeks in October 2011.

At the minute of Troy’s execution, 11:08 p.m., his call for unrelenting action “to never stop fighting for justice” will ring out over the crowd. According to Courtney Hansen of Georgians for Prison Abolition, “Organizers intend the event to not just remember Troy Davis but to build active resistance to the system that killed him and imprisons millions more behind bars and in poverty.”

As of Sept. 9, prisoners’ families reported that at least 21 men have resumed a hunger strike since the prison administration has failed to address any of their grievances as promised and guards have beaten a number of them.

For the complete wording of the call, go to the facebook page for Georgians for Prison Abolition.

That same weekend in Savannah, Troy’s hometown, there will be a three-day conference entitled “From Troy to Trayvon: Empowering Communities to Change Criminal Justice Policies,” sponsored by Community Organized Legal Advocacy or COLA, of Savannah, and Georgians for Alternatives to the Death Penalty. For more information, go to www.gfadp.org.