Los Angeles — The city of Anaheim is about a 40- to 50-minute drive south of Los Angeles and is the home of Disneyland. Yet the terror of police repression — so familiar in the Black, Latino/a and immigrant communities of Los Angeles — was unleashed in Anaheim twice, on July 21 and 22.

Why was Diaz shot and killed? The police have simply said that he was talking to someone in a car, then ran from them and that they felt threatened by something at his waist.

Yet, even this unjustified excuse for executing a person is false, according to most witnesses. One told the Orange County Register that Diaz had just been eating at her produce truck on Anna Drive, said he needed to use a hose to wash up, and walked across the street to the yard of an apartment complex. She said that three minutes later he was dead. 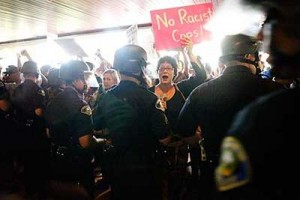 Confronting the cops in Anaheim July 25.

That witness also said that the police were forcefully trying to get her to change her story. Others in the neighborhood reported being threatened by police with deportation if they came forward as witnesses.

That fear of eyewitness reports was expressed by a reporter from KCAL News at the scene of the shooting later that day. He was reporting on the brutal attack against residents who immediately protested the killing. The reporter mentioned on the air that a few people, who took videos of the police attack with their cell phones, told him they were approached by police offering to buy their phones.

The fascist-like repression faced by this community was met by immediate protest and outrage over the shooting. However, police lies could not cover it up since it was captured on video. Police are seen shooting rubber bullets at close range at men, women and women with babies, some in strollers. A police attack dog was let go toward a woman carrying a baby. Fortunately for the baby, an adult person was able to draw the dog’s terrible bite towards himself.

It is not surprising that the Anaheim Police Department is desperately trying to spin the events in their favor. To try and justify the racist killing of Diaz, he is being painted by the police as a gang member and danger to the community.

It’s nothing new that police lie, but the events surrounding this killing are filled with an avalanche of police lies, even about the almost daily protests since the killing. On July 24, many were arrested in large demonstrations of more than 1,000 people at City Hall. Police said that most of the protesters were “outside agitators,” that very few were residents of Anaheim. However, the overwhelming majority of those arrested were Anaheim residents, with just two coming from out of the area.

Besides character assassination, another tactic used by police is to vilify the solidarity movement growing in support of the community. One example is their attempt to pit anarchists and also the local Occupy movement — which has been helping to organize some of the protests — against Anaheim residents.

One group that has been mobilizing support and whose members have been participating in the demonstrations is the Southern California Immigration Coalition. One of the leading organizations of that coalition, Unión del Barrio, issued a statement regarding the police killing. An excerpt reads:

“What we are seeing … by the response by the police, is the desperation of a system that is trying to protect its oppressive, unequal, unjust system at all costs. What this should teach many of us is that the undocumented of our community, those without ‘legal papers,’ are not the only ones the system is targeting. All Raza, especially our youth, are under attack because the system knows that in [California] and most places in the ‘Southwest’ we are a growing majority working class. All of us, especially those who oppose this wretched economic system, are targets for this type of state-sanctioned mayhem.”

Carlos Montes, recently targeted by the FBI and a steering committee member of SCIC, wrote in FightBack News: “Many in the community are visibly traumatized, but they have united to demand justice and to stop future police brutality. This Chicano community is near Disneyland and many feel the city, along with developers, want to suppress and keep the Chicano community down. The corporations want to promote the area as a major tourist attraction and resort.”

Character assassinations, promoting division against those trying to build solidarity and lies are the primary tools the cops are using here. The building of solidarity and the courage to speak truth to power, like that exhibited by the heroic witnesses who are sticking to their story in spite of police threats, will trump those tools every time.