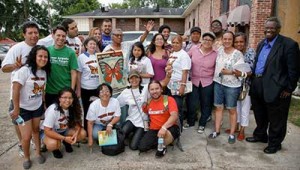 Undocubus travelers stop in Selma, Ala., on their way to DNC protests.
Four were arrested Aug. 28 in Tennessee. Photo from Undocubus on Facebook.

Demanding immigrant rights, undocumented immigrants on a bus tour traveling through Southern states will join the protests around the Democratic National Convention in Charlotte, N.C., on Sept. 1. The Undocubus tour began on July 29 in Phoenix – the jurisdiction of racist Sheriff Joe Arpaio and a hotbed of resistance to the state’s rabid anti-immigrant legislation. The tour will travel through New Mexico, Colorado, Texas, Louisiana, Alabama, Georgia and Tennessee before arriving in Charlotte.

The tour’s website proclaims: “Riding the bus alone is a great risk because of the checkpoints and profiling that have become so common. But the ride is also an arena for mobilizing, where we will build with those who have a story to tell, who have realized the only secure community is an organized one. We have overcome our fears and are ready to set a new example of courage.” Participants are described as “students, mothers and fathers, children, people in deportation proceedings, day laborers, and others who continue to face deportation, harassment and death while simply looking for a better life.” (nopapersnofear.org)