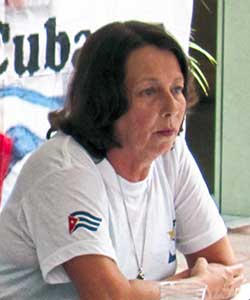 The case of the Cuban 5 and the struggle to free them from their unjust imprisonment in the U.S. received a burst of media attention in Tijuana, Mexico, on Aug. 16. Rosa Aurora Freijanes, spouse of one of the 5, Fernando González, spoke to 10 media outlets, including three television outlets, in a press conference held at the Hotel Palacio Azteca. Later in the day she appeared live on local TV.

An Aug. 17 program opening the 9th U.S./Cuba/Mexico/Latin America Labor Conference featured Freijanes, with peace activist Cindy Sheehan, Workers United union leader Cristina Vazquez and Gloria Verdieu from the San Diego Coalition to Free Mumia Abu-Jamal. Alicia Jrapko from the International Committee for the Freedom of the Cuban 5 chaired. A short clip from the Roberto Chile documentary, “Esencias,” captured the children from Cuba’s national children’s theater, La Colmenita, in a surprise meeting with the then-newly-released-from-prison Cuban 5 member, René González. In the documentary, the children ask, “What more can we do?” to win the release of the Cuban 5. The audience left asking themselves the same question about the Cuban 5 and all the political prisoners held in U.S. concentration camps for the poor.