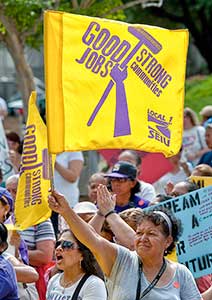 Houston — After a hot summer of mass demonstrations, civil disobedience, rallies, almost 70 arrests, prayer vigils and marches, Houston janitors — who had been without a contract since May 31 and went on strike in July — won double what the contractors had initially offered and kept the benefits that had been threatened. The deal was reached with most of Houston’s major cleaning contractors, but union officials are still negotiating with one final contractor.

On Aug. 11, the janitors, represented by Service Employees Local 1, unanimously approved a new contract and celebrated a historic victory.

Initially, the cleaning contractors offered the workers, who are among the lowest paid in the country, only a measly 50-cents-per-hour wage increase, the same increase now being offered janitors in San Francisco who are threatening to strike. According to the union, the new contract will raise wages 12 percent over the next four years. (seiu.org, Aug. 10)

Houston janitors have been organized only since 2006, after waging a strong four-week, rare-for-Houston strike for union recognition. Before this, the 5,000 unorganized office janitors in Houston earned only $20 a day and had absolutely no benefits. In 2006, their pay doubled and they gained access to affordable health care.

A struggle of rich versus poor

The cleaning contractors represented Exxon Mobil, JPMorgan Chase, Wells Fargo and Shell Oil, some of the richest entities in the U.S., but wanted to give janitors only 50 cents over five years.

According to Forbes magazine, for the last two years Houston has enjoyed more growth in the number of “High Net Worth Individuals” — people with at least $1 million in investable assets (primary homes don’t count) — than any other U.S. city.

The SEIU says the inequality is clear in Houston, where residential segregation by income is the worst in the country. In Texas, the U.S. Department of Labor reported, more than half a million workers make only minimum wage or less, tying Texas with Mississippi for the highest proportion of minimum wage jobs in the country.

After the janitors voted in favor of the new contract, Adrianna Vasquez, a bargaining committee member and janitor who works at Chase Tower, said: “Today we proved that when workers join together, we have strength. This is a huge victory for janitors and so many workers. With this new contract, our families can live a little better.”