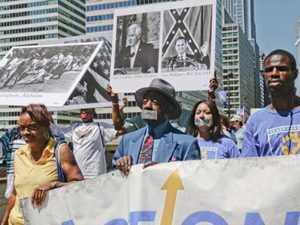 Hundreds of opponents of a new Pennsylvania voter ID law gathered in Harrisburg, the state capital, on July 24, in a rally organized by the Pennsylvania chapter of the NAACP. These activists charge that the state is attempting to implement a new “poll tax” on voters by forcing them to pay for documentation in order to secure the required photo ID card. Hardest hit would be the elderly, disabled, people of color and the poor generally.

An estimated 1.28 million people out of a statewide population of 8.2 million could be impacted. The American Civil Liberties Union has filed a lawsuit on behalf of 10 state residents who lack driver’s licenses and contend the photo-ID requirement deprives them of the right to vote.

One plaintiff, 93-year-old Viviette Applewhite, joined the protest in Harrisburg. Applewhite marched with Dr. Martin Luther King Jr. in Georgia. Years ago, she lost her photo ID and, despite multiple efforts, has been unable to obtain a new one. Applewhite has voted in nearly every election for more than 50 years.

On July 24, the U.S. Department of Justice also launched a formal investigation into the Pennsylvania law, giving state officials 30 days to back up their claim that it does not discriminate. Backers of the voter ID law have already signed a stipulation agreement, in connection with the legal challenges, acknowledging that there have been no prosecutions of in-person voter fraud in Pennsylvania.

The ACLU lawsuit had its first hearing on July 25. A second rally took place here in Philadelphia the same day. Over 100 people marched from near City Hall to the local offices of Gov. Tom Corbett. Among the speakers was Benjamin Mitchell with the Vote for Homes Coalition, a homeless advocacy group, who denounced the “people in boardrooms who are making decisions that impact people like us” and urged rally participants: “Don’t give up. We just can’t quit.”