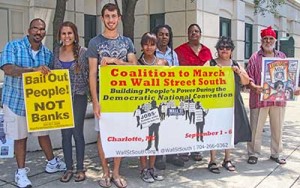 Charlotte, N.C. – Organizing for the March on Wall Street South is going full speed ahead in Charlotte and across North Carolina and beyond.

Coalition organizers have been working for months mobilizing for a series of actions Sept. 1-6 around the Democratic National Convention. Major events include a Sept. 1 Festivaliberación!, a festival organized by and centered around youth, students and immigrants; a Sept. 2 opening March on Wall Street South that includes a rally; and a Sept. 3 Southern Workers Assembly (wallstsouth.org).

From July 15-20, a delegation from the New York-New Jersey area visited North Carolina that included Victor Toro and Teresa Gutierrez, of the May 1st Coalition for Worker and Immigrant Rights; Dinae Anderson, of the International Action Center; and Larry Hales, of the Bail Out the People Movement. They met with members of Black Workers for Justice, the Farm Labor Organizing Committee, the Durham Solidarity Center and various activists in Charlotte and elsewhere.

On July 18, the delegation joined a March on Wall Street South press conference in front of the Charlotte-Mecklenberg police station in downtown Charlotte. Speakers included George Friday, of the Bill of Rights Defense Committee; Michael Zytkow, of Occupy Charlotte; Ben Carroll, a spokesperson for the MWSS; and Gutierrez, Toro and Hales.

The press conference was in response to recent announcements by city and federal police agencies about “security” preparations for the DNC; to various police agencies targeting local African-American activist Gifford Cordova; and to national leaders of immigrant rights and economic justice organizations preparing to mobilize transportation to MWSS.

“I’m part of the 12 million undocumented workers in this country,” said Victor Toro at the press conference. “As members of the May 1 Coalition, we have come here to support the March on Wall Street South coalition as well as theFestivaliberación!. We’ve also come to show solidarity with all the workers in North Carolina who face very difficult conditions and especially our solidarity with African-American workers, with the farm workers and our sister and brother immigrants here in a state that years and years ago freed itself from slavery. But many immigrants face somewhat similar conditions faced by our sisters and brothers under slavery as well.”

Added Toro: “We will come here in September to demand legalization once and for all for all the undocumented in this country — just like the struggle of the Dreamers, legalization for all the workers. We want an immediate end to the raids and deportations. We want an immediate end to the division of families when a mother or father is deported in a family. In September hundreds of immigrants and organizations will come here to demand their rights. We believe that very conservative forces are on the offensive in this country; thus workers and immigrants have to get to their feet to stop the laws such as those in Arizona and Alabama. We can’t go back to the violation of civil rights or that our human rights continue to be violated. These are the demands and issues that we will raise to the president of the United States.”

That evening, Toro, Gutierrez and Hales were featured speakers at the event “Building Unity: Lessons from May Day 2012 and DNC Demos in 2008” at the Charlotte Solidarity Center. A screening of the new documentary “5 Days in Denver” was shown, followed by talks and discussion.

“The March on Wall Street South is needed to show the working class that we do need to fight no matter what party is going to be in power in the upcoming election,” Dinae Anderson, a 16-year-old youth activist told Workers World July 18. “We need jobs, housing, healthcare and education, and it’s a necessity to show the politicians that we are not going to give up on our rights and that we’re going to fight for them.”

Added Anderson: “Charlotte is a city where so many big companies like Bank of America, Duke Energy and Chiquita are. That shows we are in the center of Wall Street South and that things don’t change when you come down from New York where there are so many big bankers and the New York Stock Exchange. We gotta make our voices heard. They got to hear us loud and proud.”