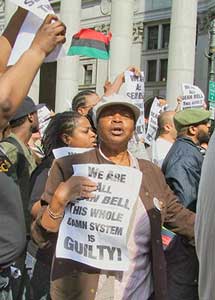 Dolores Cox, in white cap, prior to her 2008 arrest in protest of
racist police murder of Sean Bell. WW photo: Monica Moorehead

When wars are declared, enemies are designated to justify them, whether for real, imagined, opportunistic or fabricated reasons. Actions such as wars are based on an ideology. In the category of the longest wars in U.S. history, the war on its African-American population must be included. For centuries, Black people have been targeted for enslavement, wholesale violence and murder, state-sponsored racism, and legal segregation. They have faced discrimination, oppression, induced poverty, destruction, marginalization and repression. The lives of Black people under capitalism are disregarded.

The law of the land in the U.S. has always been “white supremacy.” As a result, anyone with a designated amount of skin pigmentation is labeled an enemy by the state and by those who embrace the state’s position. Fundamental rights for all have never applied in the U.S. Instead, privileges are granted to some, and second-class citizenship to others; this is based on “acceptable” views on skin color and ancestry. Even the dictionary definition of the words “black” and “white” reveals the subjective bias.

Under U.S. society’s “one drop” rule, one known drop of so-called “Black blood” automatically makes one Black. That automatically makes the individual a target of racism. Conversely, one drop of known “white blood” never automatically makes one a member of the white group. The rule never works in reverse. To qualify for inclusion and equal treatment within a society like the U.S. dominated by institutionalized racism, one has to belong to the specific group possessing “white” blood and skin color. This determines the civil and human rights a person is entitled to in the U.S.

During the period of Jim Crow apartheid, Black people were taxed without representation. Blacks were also under siege in their own communities. This hasn’t changed. In New York City, neighborhoods are largely segregated, notwithstanding encroaching gentrification. Public schools are as segregated as they were before the Brown vs. Board of Education Supreme Court ruling.

There has never been a level playing field in U.S. society. Deliberate placement of obstacles, double standards, denial of aspirations and thwarted opportunities in every field of endeavor are historically based on skin color and ancestry. Discrimination in housing, employment, education and health care access negatively impact the quality of life for every Black family, causing needless pain and suffering.

There have always been disparities in upward mobility, gaps in wealth, income, status and standards of living for the Black population. Since the official end of slavery, Black workers have become a dispensable workforce to be exploited, by every means necessary.

Along with Native peoples, Latinos/as, Arabs, Muslims and Asians, African Americans along with other peoples of African descent have been targets of daily abuse, aggression and domestic terrorism.

Criminalization of the Black population is longstanding. Its impact on Black families has been devastating. Racial profiling by police is increasing the rate of arrests and incarcerations to enormous numbers. Prisons have become a big for-profit industry in this capitalist society, with large corporations like Wells Fargo investing in them.

In recent years, racial profiling by the Bank of America, Wells Fargo and Chase banks has been rampant. These financial institutions arranged discriminatory, predatory, subprime mortgage loans with higher rates and fees, which have resulted in millions of home foreclosures and evictions. Approximately one-third of those targeted were eligible for standard loans. These mortgage brokers took advantage of African Americans who desired to have a piece of the “American Dream,” but who traditionally were denied mortgage loans based solely on skin color.

The school-to-prison pipeline is the path for Black youth. Racism and a failed public education system enter into it. Unlawful “stop-and-frisk” police policies predominantly target Black males; they annually number in the hundreds of thousands, just in New York City alone. Blacks are also disproportionately victims of police killings and brutality. The so-called “war on drugs” and the “crackdown on gun possession” are largely aimed at the Black community.

The U.S. has never been a “land of the free” or “home of the brave.” Its stated claim of “life, liberty and the pursuit of happiness” has never been inclusive. The abuse of power by those in dominant positions in the state has resulted in perennial attacks on the freedoms of African Americans. Racism has been entrenched into every social, political and economic institution and system in this country. Moreover, the U.S. exports it globally as well.

The war at home has escalated. Today it includes attacks on public sector workers and unions, college students, and the poor and homeless. It includes more mass incarcerations and state-sanctioned attacks on immigrant groups and undocumented workers. Spying on and entrapment of Muslims has increased. Government harassment, raids and repression of activists have escalated in the so-called “war on terror.” Religious bigotry has intensified. Civil liberties are increasingly under attack.

Endless wars abroad are directly linked to the war at home. The cost of external wars means less money is spent on essential social programs and services for those in need at home, which has always included African Americans. By design, those in power have intentionally kept people of African descent at the bottom of the social, economic and political ladder by institutionalized and systemic racism. African Americans have consistently borne the brunt of capitalism’s failures to provide for societal needs and to equitably distribute resources.

The human costs of U.S. militarism abroad are either downplayed or barely mentioned by the big business media. This includes the numbers of civilians injured and killed abroad — women, children and men, the displacement of war victims, refugees and the destruction of infrastructures required for survival. The injuries and deaths of soldiers are barely raised either. The human costs of the domestic war on the African-American population have been ignored for far too long.

There have always been calls to action for social, economic and political justice. Struggle is the name of the game. During the current capitalist economic crisis with its rising unemployment, the Black population’s condition has worsened and become more challenging. With trillions of tax dollars spent on invasions, bombings and warfare, and with a corporate-run government and a pro-rich capitalist economy, a bigger, stronger, multinational struggle is required. Class unity and solidarity are needed. In order for people’s power to succeed, all groups, on every level, need to work together to defend on all fronts against a government whose power has gone awry based on its allegiance to capitalism and imperialism. n