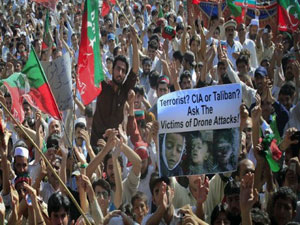 A deal in early July papered over frayed relations between U.S. imperialism and Pakistan’s government. But it did little to calm the Pakistani people’s anger at being a target of the U.S. war machine.

Secretary of State Hillary Clinton showcased the administration’s military strategy for Central Asia with an “apology” to Pakistan and a pledge to keep Afghanistan a “friend of NATO” should U.S. troops leave as scheduled in 2014.

Last December, U.S. planes attacked a military post on the Pakistani side of the frontier with Afghanistan, leaving 24 Pakistani troops and officers dead and the Pakistani army furious. The Pakistani government then blocked NATO supply routes to NATO forces in Afghanistan. They demanded a formal U.S. apology and later said they would charge $5,000 a truckload through their roads, instead of the prior $200 price.

Meanwhile, NATO had to pay an additional $100 million a month to ship supplies using alternate routes.

The Pentagon claimed that relations were too cozy between the Pakistani military post and the Taliban-led resistance in Afghanistan. U.S. generals refused to give the apology during the next seven months as U.S.-Pakistani relations soured. Finally, a deal was worked out in early July where Clinton said the U.S. was “sorry” about the deaths of the Pakistani soldiers, the U.S. would restore $1 billion in aid to the Pakistani army, and the supply lines would be reopened.

How long will the agreement last? Pakistani military and intelligence officers have friendly relations with the Taliban, which they helped get into power in the 1990s. Since the Pakistani generals can rightly expect that the Taliban will eventually help form the Afghan government, the generals will want to maintain relations and influence in post-occupation Afghanistan.

Washington and the Taliban coexisted easily in the mid-1990s. Only after the 2001 invasion and NATO occupation did the Taliban-led Afghan resistance confront and challenge imperialism with the goal of driving the imperialist occupiers out of ­Afghanistan. Now the U.S.-NATO problem is that any clean victory for the Afghanresistance is a humiliation for imperialism.

The contradictory interests of the Pakistani military and U.S. imperialism may still lead to a break between the regimes in Islamabad and Washington. This is true even though Pakistan’s wealthy ruling class and its military have been dependent on their relationship with the U.S. throughout their history.

Pakistani people in the streets

The vast majority of Pakistan’s people are furious with U.S. imperialism, not just for the attack on the border post, but for the ongoing drone attacks on Pakistani territory, which kill children and other civilians, though allegedly aimed at “insurgents” that support the Afghan resistance.

Though the governments reached a deal, Pakistan’s people have already shown that Clinton’s “sorry” falls short. Some 8,000 people packed 200 vehicles to make the 170-mile “long march” caravan between Lahore and Islamabad to protest the opening of the NATO route.

Islamic organizations were the major organizers of this particular protest. Anti-imperialist attitudes, however, go beyond these groups. The Pakistani secular left is also opposed to NATO’s occupation of Afghanistan, to the dominant role of U.S. imperialism in Pakistan and especially to the U.S. drones that target Pakistan.

A meeting of the Pakistani-U.S. Freedom Forum in Brooklyn, N.Y., on June 23 reflected these attitudes among different sectors of Pakistani society. Everyone was angry about the drones. Many speakers attacked the current U.S. administration as being even more aggressive than the prior George W. Bush administration.

In Afghanistan, the war continues. Six more NATO occupation troops lost their lives in an attack by the resistance on July 8 as the war allegedly winds down.