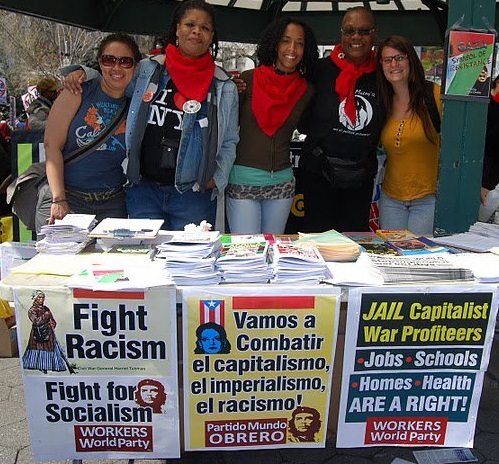 As Marxists, we strive not just to honor history, but to make it  — to promote changes that put the workers and oppressed first instead of last. Workers World commemorates the socialist holiday of International Working Women’s Day, March 8, with a roundup of women’s protests for freedom, justice and equality the world over.

Struggle is the only way to bring about change. Like the Black Lives Matter movement, started by women and gender-nonconforming activists, which boldly fights racism and demands redress for centuries of oppression. Women are powering the fight for $15 an hour and a union because two-thirds of low-wage workers are women, often women of color and heads of households.

Inspired by the #MeToo Movement and Time’s Up, women are speaking up at work — particularly in restaurants, offices and hotels — against sexual harassment and for respect, along with trans women resisting horrific sexual assaults by police and prison guards.

WW will continue to focus on women who bear the brunt of Trump’s racist, sexist, bigoted, xenophobic agenda: im/migrant women and refugees detained and often deported for the “crime” of crossing borders to find work and provide for their families or to escape life-threatening repressing and violence; children separated at the border from parents, making it nearly impossible to reunite them; and “Dreamers” whose legal status under DACA is still in limbo.

If you appreciate WW’s year-round coverage of struggles that advance women’s liberation, join the WW Supporter Program. For a donation of at least $75 a year — and much more if you can — members receive a year’s subscription to WW, a monthly letter about timely issues and five free subscriptions to give to friends. Write checks (either monthly or once a year) to Workers World and mail them, with your name and address, to 147 W. 24th St., 2nd Floor, New York, NY 10011. Or sign up at workers.org/donate/ for monthly deductions. Know we appreciate your help in building Workers World — for today and for the future.