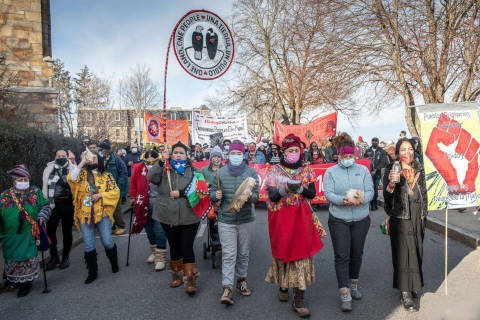 #NationalDayOfMourning livestream will start at 12 noon EST on Nov. 24.
The opening prayer ceremony is not recorded, so there is a standby at the beginning.
Other places to watch:

**Live ASL interpretation will be on-screen for all speeches.**

A live discussion with anti-fascist Ukrainians and U.S.-based allies, on the 2014 massacre at the Odessa House of Labor and the continuing struggle.

NATO: “The Greatest Purveyor of Violence in the World Today”

A Workers Assembly Against NATO raises the historic role of NATO as a U.S. weapon to push back the gains of the working class and impose Wall Street rule. Hear workers around the world define what is at stake in this war, including:

The fires of war have been lit in Ukraine. The U.S. corporate media fans the flames despite the best efforts of anti-war activists around the world attempt to extinguish them. Now President Biden has poured gasoline on an already volatile situation by issuing this ultimatum: there will either be sanctions or there will be nuclear war.

This threat means that, no matter what, the U.S. is hell-bent on making Ukrainians and Russians suffer. It means that the U.S. and NATO is holding all of Europe hostage in order to expand its military might on the continent.

Join the International Action Center for a lively discussion of why the Biden administration seems only to want to escalate this crisis and why we must must reject this arrogant and dangerous ultimatum to prevent the outbreak of another world war.

Hosted by the Women and Oppressed Gender Caucus of Workers World Party
The panel, discussing struggles and how they relate to an anti-capitalist, anti-imperialist perspective, will include:

Norma Pérez from A Call to Action on Puerto Rico and a former teacher
Kisha James, a leader of the United American Indians of New England and a member of the Aquinnah Wampanoag/Oglala Lakota tribal nations
Marie Kelly, a registered nurse and an at-large member of National Nurses United.

Talk from November 1993 on the period between the Menshevik and Bolshevik revolutions.